Stock performances of the European listed biotech companies were positive at the end of 30/09/2019, on average. However, the median performance is -9.0%, leads to an easy conclusion: the average performance was driven by outliers on the gaining side. Unlike 2018, where overall, there was a common pattern downwards, 2019 data are heavily spread among the countries or country clusters. The average performance was +5.5% at the end of the quarter for 152 companies in our universe. Most of the following data will be from 150 companies, as there were only 2 new listings this year, so far (because new listings are not included in the indices).

After a terrible year (around -50% average and median), the UK biotech companies regained almost 40% during the first 9 months of 2019, on average. But given the median performance of -14.5%, the nightmare continued for a significant part of the British biotech landscape. Indeed, the Top 5 best performers at the end of September were UK bios (see ranking on page 4). Of note, the gains on these stocks were beyond +200% for these 5 stocks, and even reaching +500% for the leading company (Shield Therapeutics), and +400% for its follower, Reneuron. Motif Bio, following the CRL for iclaprim, and not more cash, plunged by 97% (the company will try to sell iclaprim and will become a cash shell, would such an operation be completed).
Same mixed data for Belgian/Dutch biotech companies, with +5.9% on average but a -21.6% median performance.
Three countries/clusters (Denmark, Italy/Spain and Germany) had their public biotech sectors in positive territory both on average and for the median.
Switzerland rebounded during the Summer with Idorsia and Basilea, and ended Q3 at -2.3%. The laggards were Norway/Finland (-8.7%), Sweden (-9.7%) and finally France (-13.7%), all well in the red.
Of note, Italy/Spain peaked at almost 60%, as this cluster is composed of only 6 biotech companies, of which 5 had a positive trend during April. Though, all the gains faded progressively throughout the next period. Only PharmaMar remained a major gainer at the end of last quarter (+67%).
Overall, the Danish and British biotech sectors were the 2 sectors with an ongoing positive trend, both since the Spring. On the opposite side, French biotechs seem unable to sustain a durable recovery (Theranexus & Inventiva clinical failures, another set of weird data from Gensight, continuous decline of many stocks). Swiss biotechs were also hit by Polyphor sudden shutdown of murepavadin pivotal program, by negative topline data in PBC for Genkyotex, and by a partial clinical hold at Molecular Partners (lifted later on). Despite a small bump during the Summer, mainly due to phase 1 data for a couple of micro/nanocaps (Cyxone & A1M), the trend for the Swedish sector is also negative. For Germany, Probiodrug rallied in April, after having found investors to save them from a situation could have led them straight into administration. On top of that, the company also found solace in the research of a Dutch lab on the repurpose of their lead asset in oncology. Later on, Probiodrug, now Vivoryon, granted Morphosys a license option for that compound (a series of compounds actually). At the same time in April, speculation started on Mologen, and Co.don, who also spiked after the commercialization launch of Spherox in Switzerland. Unfortunately, early August, Mologen cratered after the phase 3 failure of their lead asset. Bad alignment of planet as well, since the US/China trade war intensified in August, leading to a global decline. For Norway and Finland, there was almost no truce after the terrible month of December last year. Biotech stocks went down right at the beginning of the year, and since then, they have been oscillating in a range below neutral. 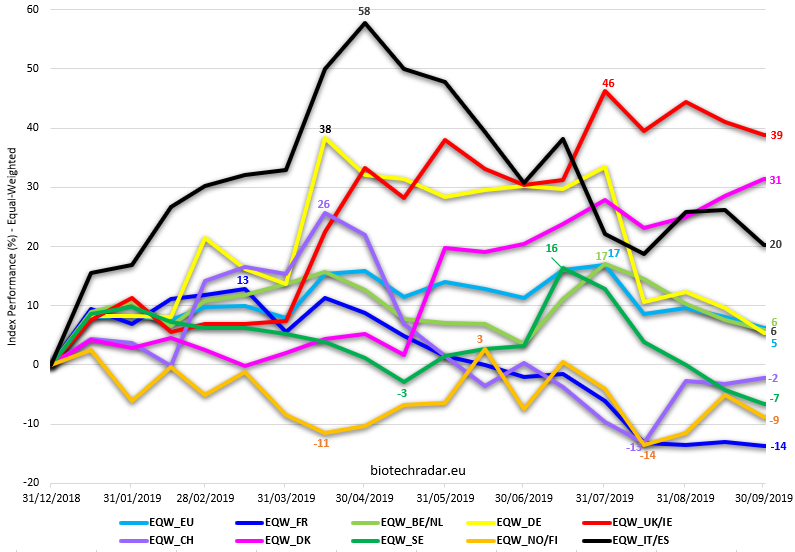 Large recovery for the US biopharma sector after the annual J.P. Morgan Healthcare Conference bump. This was especially the case for smaller caps over the first quarter, as the XBI ETF (Equal-Weighted selection) clearly outperformed the IBB ETF (Cap-Weighted) on that period. However, things got more complicated for the sector with the return of the usual macro factors ("Trade War"). So that both XBI and IBB almost lost all their gains in Q3, after a rebound in June. For European biotechs, the J.P. Morgan Healthcare Conference bump was much more modest but the little gains accumulated were preserved, until a new rise in the first part of April (global effect, but especially for smallest caps, as shown by the slope of the Equal-Weighted Index compared to the lower slope of the Cap-Weighted Index - see also the next page). But the largest caps then took over during the Summer, with the giant deal between Galapagos and Gilead mid-July. Concomitantly, many of the largest companies viewed their stock gains amplified over that period, for various reasons, (DBV Technologies, argenx, Evotec, Morphosys, Bavarian Nordic, Biofrontera).
One can finally observe that on both sides of the Atlantic, the largest caps -driving the performance of the Cap-Weighted Biotech Index/ETF- did better over the hectic August/September period, as compared to the smaller caps. That was not particularly the case in the Spring, at least in the US. 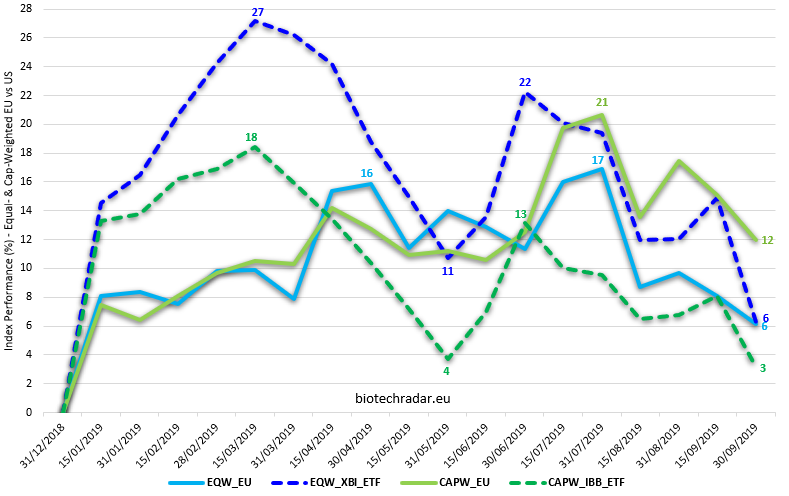