In 2018, the companies into the top Inter-Quartile Range (top 25% largest caps as of 31/12/2017) had a better performance than the companies in the other IQRs (no gap in-between the 3 other IQRs), thanks to a gap build in Q1 2018. This year, the picture is different, with the smallest caps (IQR1) clearly outperforming, on average. However, this is not true for the median performance, so the results are very spread. Indeed, and in spite of the usual crashes in this market cap segment, the smallest caps benefited from many surges in the UK, with a nice catch-up of 500% for Shield Therapeutics. The British company had announced negative topline data for Alkindi last year, but found inconsistencies hiding positive outcomes few weeks later. The FDA gave its green light for filing. Positive outcomes were also obtained early in 2019, leading to the US approval at the end of July. In short, a good story. The CEO of Shield believes that there is still room for upside, since the stock only went back towards it IPO level with these news. The other crazy run was for Reneuron, another British company, with more than 420% gain at the end of Q3. Earlier this year, the company unveiled amazingly good data for their stem cell therapy, but on n=3 patients with retinitis pigmentosa. Speculation started and boosted the stock. However, earlier in October, a "reality check" occurred, with much less impressive data on the subsequent cohort of patients, whose baseline VA was intended to be higher than the previous cohort. Stock is falling sharply since. Okyo, yet another British company, still at preclinical stage, also view its share gaining almost 250%. The company floated last year in London, and just preclinical proof-of-concept data have been disclosed so far, which was enough to bring some light on the stock. two other British companies drove the outperformance of the smallest caps: Silence Therapeutics, who inked a deal with Mallinckrodt, and Nuformix, who demonstrated the bioequivalence of NXP001 to Merck's EMEND in a pilot study.
On the contrary, many companies in the third highest interquartile range of market cap knew very significant stock falls. Motif Bio, the worst performance for a biotech (-97.3%) at the end of September, belongs to that segment. Many other companies with high expectations on clinical data or with respect to their regulatory pathway did not meet these expectations. On may quote Polyphor (lead pivotal program terminated due to hepatic toxicity), Genkyotex (missed the primary endpoint in PBC), Gensight Biologics (destabilizing data for their gene therapy), Inventiva (missed all the endpoints in scleroderma phase 2b), or Pharnext (too optimistic guidance for a US filing). All these companies lost 60-66% over the first 9 months of this year. Also the investors did not really like the merger of Mereo with Oncomed (-66%). In conjunction, only one company in that segment performed very significantly: Nuevolution (+90%), acquired by Amgen. Overall, one may see the underperformance as a reflect of the difficulty for still relatively small companies to pass the mid/late-stage steps successfully and with unequivocal data, due to the inherent attrition at these phases of development.
Finally, since the end of July, the global trend is negative for every segment of market cap. 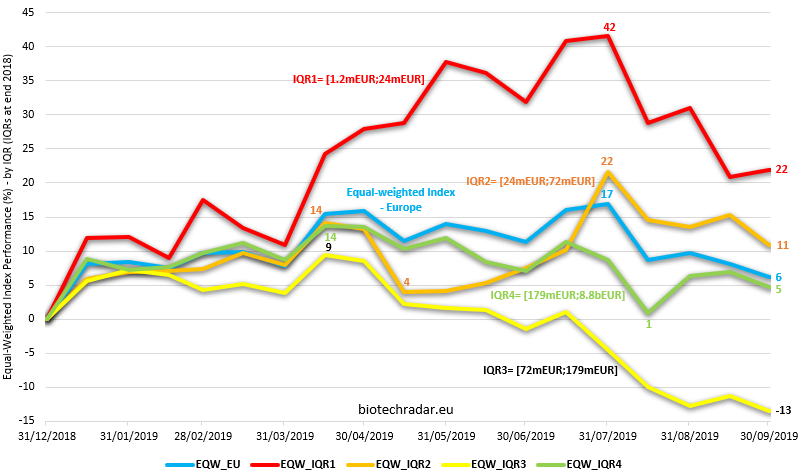 The chart below shows the statistical data by IQR, and for the whole sector (n=150). In terms of median performance, the largest caps did slightly better over the first 9 months of 2019, but were still in negative territory with -7.2%. The smallest caps had the worst median performance, with -12.9%. This is what is expected in this sector. 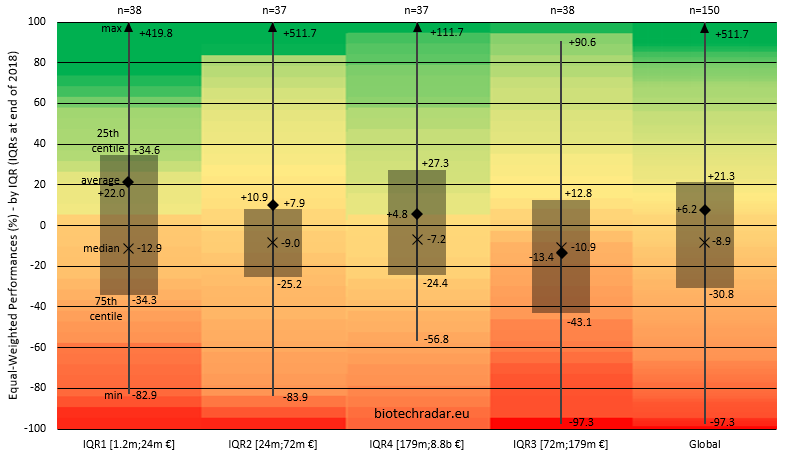 Finally, the distribution of gainers and decliners from one period of half a month to the other is displayed below, for the first 9 months of 2019. The mood was positive at the beginning of the year and in early April. Much less so in May or August (84% of the landscape in negative territory in the first half of the month!). After a short-lived rebound in neutral area, the overall sentiment went down again during September and early in October. 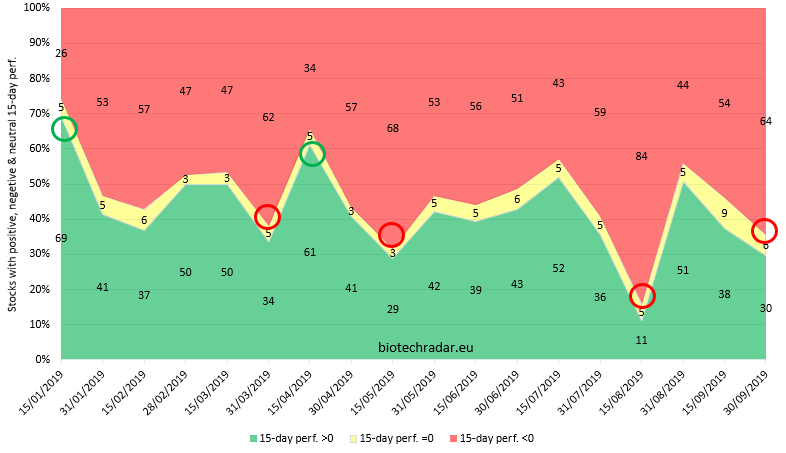 Gainers / Decliners over the 9M 2019 - n=152
Pages: 1 2 3 4 5
error:
Manage Cookie Consent
To provide the best experiences, we use technologies like cookies to store and/or access device information. Consenting to these technologies will allow us to process data such as browsing behaviour or unique IDs on this site. Not consenting or withdrawing consent, may adversely affect certain features and functions.
Manage options Manage services Manage vendors Read more about these purposes
View preferences
{title} {title} {title}