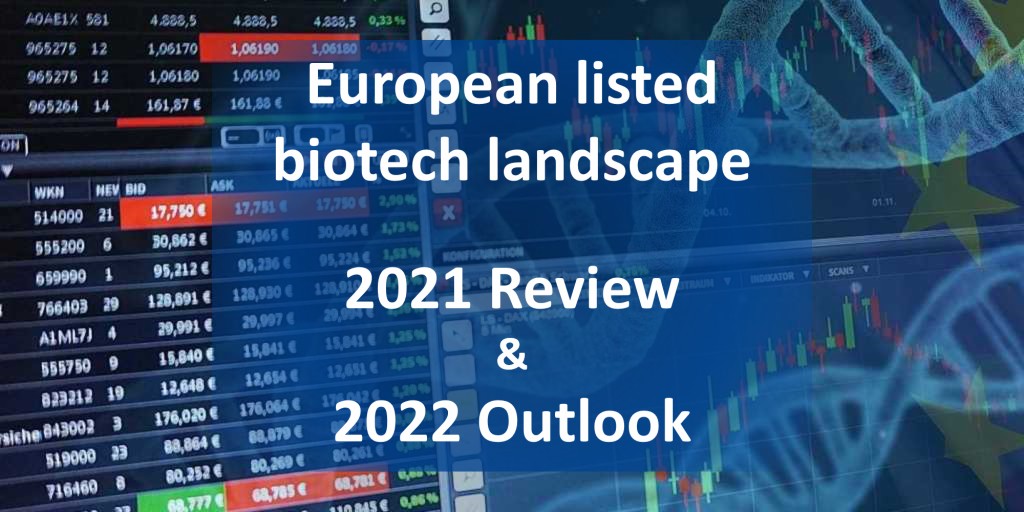 
2021 has been a very bad year for the performances of the bio, with the European public sector mimicking the performances in the US on an equal weighted basis. The amplitude of the correction somewhat reminds the air pocket of 2018 for the amplitude. And the beginning of 2022 in the US is the just prolongation of 2021, even though december was relative flat. The European sector experiences a limited decline in the early days of the new year, dragged down by the largest caps… in majority dual-listed in the US.

Following a very stronger 2020, everything had started well last year. A bit too well actually! Without any fundamental reason outside the bullishness of some investors to invest on innovation, the sector, in the US but also in Europe, peaked in the middle of February. The move was apparently fueled by inflows notably via some ETFs in the US, which created a bubble-like configuration on the valuation of some companies. Not only this bubble deflated to it pre-bubble level, but the correction went further along the year, even if the Aduhelm approval provided a transient relief in the third quarter. So, there had to be a consolidation of 2020 and of the first weeks of 2021, but this consolidation comes with bumps in the road.

The -20.5% on the XBI ETF, seen as the gauge for smidcap bios, in 2021 was already bad by itself, but even more striking was the massive underperformance versus the main indices like S&P500 (approximately +27%) or the Nasdaq Composite (approximately +21%), which makes the sector performance even worse. The very same phenomenon occurred in Europe, with a mean performance of -16% for nano-to-smid bios in Europe, when all the regional indices jumped from 14% (UK FTSE 100) up to 29% (French CAC 40). In short, there was a clear sector rotation detrimental to healthcare vs other sectors and recovery plays in 2021.

For the sector overhangs, it seems the regulatory concerns (stricter scrutiny of M&A operations with respect to competition) were seemingly mostly overdone, unless the acquirer refrained themselves upstream, potentially participating so the slow M&A activity seen in the sector in 2021 [Evaluate 2022 Preview, SVB Healthcare Investments & Exits Annual 2022, EY M&A Firepower Report 2022]. Some political threats on drug pricing regulations were cleared in Q3, but it was without counting on the Build Back Better Act at the end of the year. The "BBBA" remains an important topic (as discussed here or there), as potentially being the first very concrete step in the US to address the dug pricing issue.

Then, even if this plan is to be executed over several years, is it potentially calling for more important restrictions in the future? Moreover, even if the Aduhelm draft National Coverage Determination, set to "Coverage with Evidence Development" (the most restrictive scenario), is mainly seen as a "one-off" -preliminary- decision, some already fear this could call a broader use of CED, which would indeed be bad for the industry (P.S. the Aduhelm story seems to be far from over yet! Stay tuned for the next episodes!).

Inflated valuations in the US at the beginning of the year have probably made some interests of the usual suspects in the acquirer list to fade away for some time. Though, we started to see some interesting deals, like the buyout of Arena Pharmaceuticals by Pfizer, far off the highs. Now that the valuations cooled off (although some valuations, e.g. in C&GT, still remain high), it will certainly create more opportunities. Nevertheless, according to some Big Pharma comments at the JP Morgan Healthcare Conference this week, it doesn’t seem that there was any shift in the narratives of their potential target executives in the past few months (i.e. they are not particularly more prone to accept deals).

One of the other hot topics at the end of 2021 was the number of IPOs in the US. According to the data compiled by Evaluate, the IPO count has peaked in number in the first half last year, before dropping significantly throughout the end of the year. A tweet including a slide from a Bank of America research shows the development stage of the IPOs over the past decade.

Biotech IPOs by stage of the company pic.twitter.com/YA0hPbzvxx

The shift towards earlier stage companies has been clear over the past 2 years, with very early-stage (preclinical & phase I) representing more than half of the IPOs in 2020 & 2021, much higher than historically.

Bruce Booth, VC partner at Atlas Venture, posted another interesting slide in his "Year In Review" video (warmly recommended), supporting again the idea of more early-stage (pre vs post phase 2, that one may approximate by pre vs post Proof-of-Concept) in the past couple of year.


Then the question is whether there were too many preclinical or early-stage IPOs. It seems there is a consensus that the answer to this question is yes, but the debate is still on. In Europe, this issue was already seen in the past, e.g. in France with the IPO class of 2015, and it is actually still a topic. One may quote the Swedish public bios, who are extremely biased towards being very early-stage companies (25% preclinical and 53% pre-POC, out of n=55 companies in our universe at the end of 2021). Thus, Sweden serves as a laboratory at the European scale on how to handle such an early-stage landscape over the years, notably in terms of financing, a concern/question already noted in the prior years or in our introduction to the European landscape more than 2 years ago). One shall see how things will turn out on these early-stage IPOs in the near future, but the trend on faster and faster VC investment cycles don’t seem to support a reversal anytime soon (as exemplified in Bruce Booth’s Year in review below), unless the IPO market significantly deteriorates to signal that too many & too early is not what investors want to see. 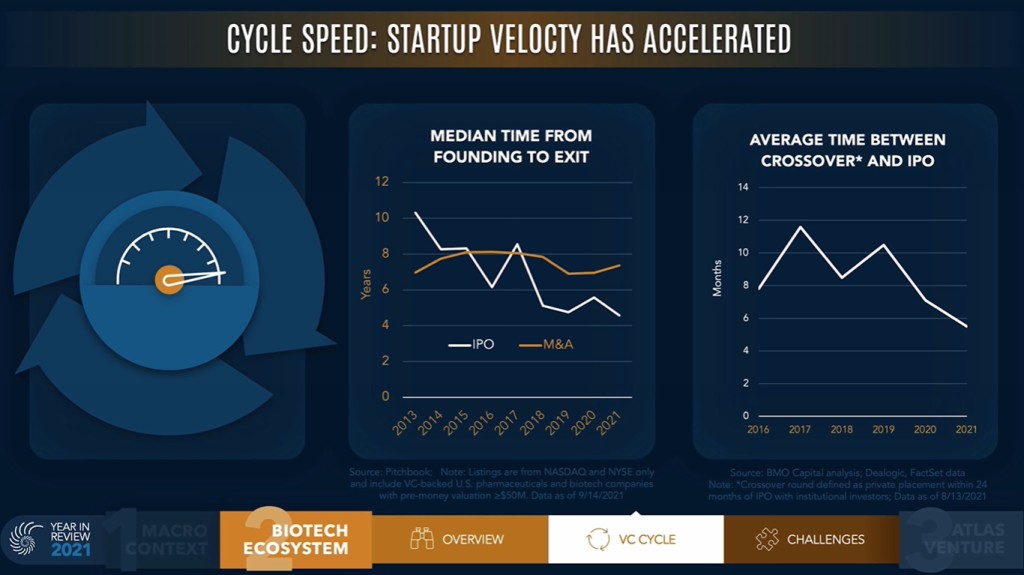 
The analysis below is not exactly the same, but we observe a similar trend for the biotech companies listed in Europe, within our universe. Indeed, the time from inception to IPO (among the listed companies) was roughly cut by 2 in a decade. 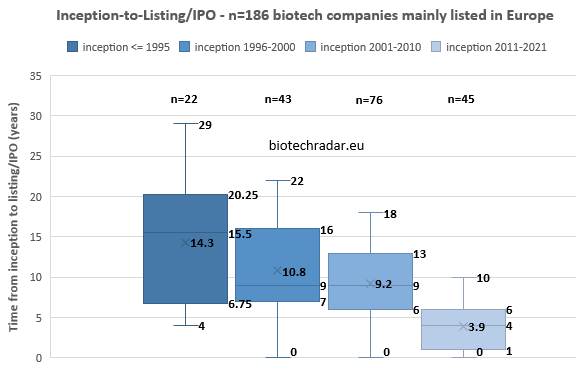 Similarly, the 2021 new listings in Europe were also overwhelmingly early-stage/pre-POC IPOs or transfers from secondary markets (the case of Sweden).

Even if in Europe, the performance of the sector is not always exactly correlated with the US, there are now 26 dual-listed companies (EU/US) in our universe, with the 2/3 of them being among the most highly valued biotech companies. As a consequence, there is some sort correlation with the US with this subset anyways. The European landscape (93 bEUR of market cap in the main European domestic markets, plus half that only listed on Nasdaq, excluding BioNTech) is still looking for new champions. Champions that one may already find in our "Billion Euro Market Cap Club". Not much evolution between 2020 and 2021 in the Club, in terms of number of names in the list, but still a small increase in total market cap.