While a deal was expected by Morphosys, nobody was expecting such a large transaction by the German biotech. Indeed, the acquisition of Constellation amounted to 1.7bUSD in cash, whereas Morphosys was only worth 2.4bEUR. Notwithstanding the rarity to see a European biotech acquiring a US peer. The deal was possible with a leveraged structure, thanks to funds from Royalty pharma. In exchange, the royalty-collecting company got their hands on future royalties from Tremfya (100% of royalties owed by JNJ to Morphosys), and also from potential future revenues for gantenerumab in AD (60% of royalties owed by Roche), or from otilimab in RA (80% of royalties owed by GSK). Small single-digit royalties on pelabrasib and CP0219 would also be owed by Morphosys to Royalty Pharma, not forgetting that they algo have stake in the German company. For those interested in the deal process, you can read this very interesting post on the Timmerman Report website.

All in all, this acquisition, with the goal to trade immediate & short-term royalties for potentially larger amounts with fully-owned assets, but in the mid-long term, did not convince the investors, according to the stock performance. One also has to say that the launch trajectory of Monjuvi in the US has not matched the high expectations that the investors had for Monjuvi. The objective of 500-750mUSD peak sales in 2L DLBCL can still valid, but likely more in the lower part of this range if it does. The uncertainties linked to the launch of 2 CAR-T therapies in 2L might also weigh on the investors’ sentiment. Thus, the focus may be more on 1L DLBCL, where Polivy has not completely convinced during the last ASH meeting, but the readout of Monjuvi’s phase 3 in this setting (guided for 2025) is not around the corner yet. Finally, the CEO likes to remind the optionalities in the current fully-owned pipeline. Unfortunately, the current stock performance tends to follow a Galapagos-like trend (current EV of approximately 500mEUR, very far from the highs), which seems to be quite tough, with a cash horizon beyond the pelabrasib phase 3 readout in myelofibrosis. The FY22 guidance for the US sales of Monjuvi was set to 110-135mUSD, from 79mUSD in 2021. POC data of CPI-0209 (2nd gen EZH2 Inhibitor) & felzartamab (fully-human anti-CD38 mAb) are expected in H1 and H2 this year, whereas Roche expects phase 3 results in H2 for gantenerumab in AD. GSK should also disclose the phase 3 outcomes of their anti-GM-CSF mAb otilimab in RA. 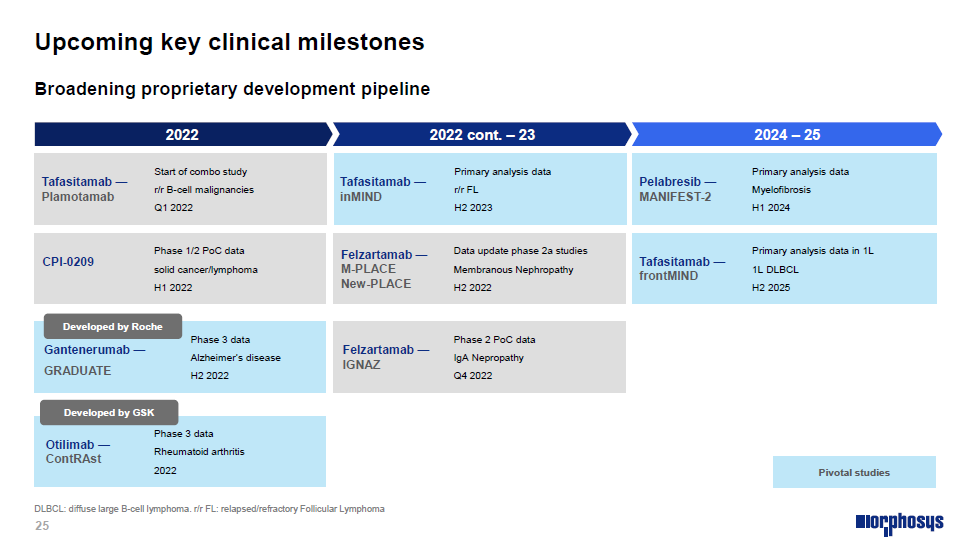 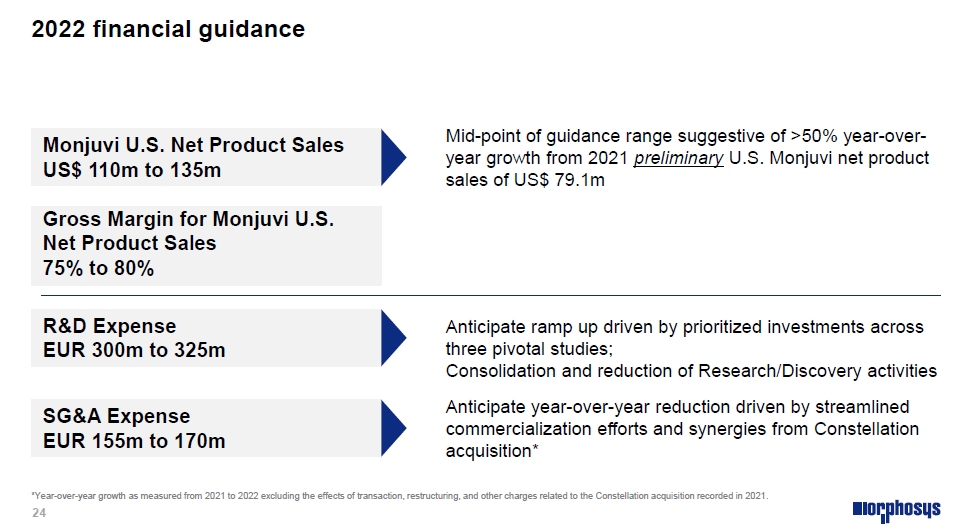 argenx to enter the commercial stage with VYVGART, like Calliditas and others

According to the Evaluate data, VYVGART (efgartigimod, anti-FcRn), from argenx, is among the highest NPV around in the industry (almost 10 bUSD at the end of last year), if not the highest NPV among the unpartnered asset, which de facto makes the company an acquisition target. However, the commercial launch is just starting, right in the middle of Omicron. The management has spent the last month to temper the expectations (around 100mUSD of revenues for 2022 in gMG) for the VYVGART sales, citing several factors: the pandemic, the availability of the J-CODE in the latter part of the year for a first-in-class that will require education and awareness efforts, a learning curve to expect on the dosing frequency, etc. However, without the safety issues experienced, a broad label (excepting the AChR-negative population), and financing means, argenx has everything to become the European Alexion, which is the CEO’s ambition. The competition of UCB is around the corner, with rozanolixizumab (in subcutaneous formulation). But argenx remains in the race with its own subcutaneous formulation of efgartigimod, for which results could be coming in the coming weeks (Q1’22 guided). UCB has ambitions in gMG, where they should also have an anti-Complement C5 agent, gMG being one of the 5 subpopulations where UCB wants to be the leader. Though, other key readouts are expected in the next 18 months for argenx, with the phase 3 of both IV & SC in ITP, the phase 3 in pemphigus at the end of the year, or the phase 2a Part B data in CIDP, the largest single opportunity for efgartigimod. Additional indications have also been added for efgartigimod, by argenx or by/with partners, the ambitions being to be in 15 indications by 2025. An answer to JNJ’s broad program with the anti-FcRn acquired from Momenta. Additional programs are also in clinics, although at earlier stages.

Calliditas, from Sweden, also got Tarpeyo approved conditionally by the FDA recently, in IgA Nephropathy, with a little surprise on the pricing, higher than anticipated. Thus, the attention on the launch will be of interest in 2022.

Obseva, as Swiss company, will also market Yselty (GnRH Receptor Antagonist) in Europe in Heavy Menstrual Bleeding due to Uterine Fibroids. Obseva is expecting the EC approval by mid-February. Then the company will have to deal with the lengthy process to gradually increase the coverage in each Member State. The US approval in uterine fibroids is still pending. Obseva also disclosed positive phase 3 results in endometriosis earlier this month. 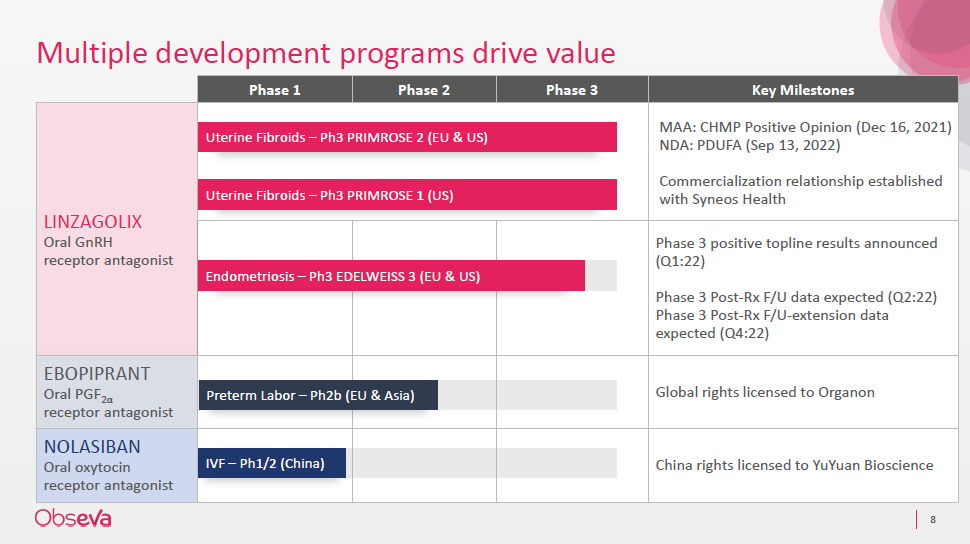 Poxel’s imeglimin (brand name TWYMEEG) was also the company’s first approval, via their partner Sumitomo, in Type 2 diabetes in Japan. While the French company focuses its own programs in NASH and rare diseases (AMN), these first royalty streams will help the company to fund these programs further. Both the NASH Phase 2b and 2 AMN POCs are expected to yield results in H2’22. 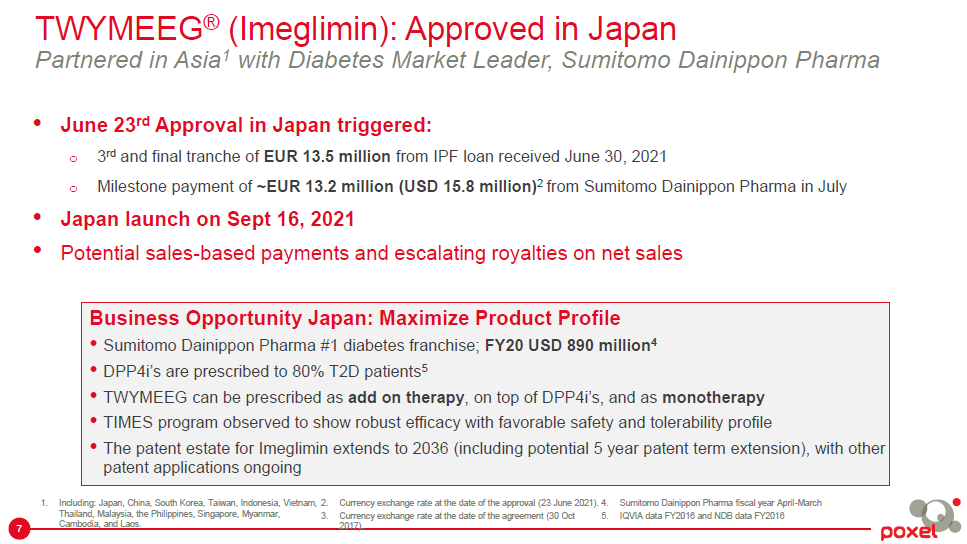 Mithra, another Belgian company, also received the green lights from several regulatory agencies (US, CA, EU, RU) for Estelle (brand names: Nexstellis, Drovelis, Lydisilka, Esteretta) as an oral contraceptive for women. Here again, the actual marketing involves partners, for whom Mithra will supply the drug and from whom Mithra will collect royalties. The company also unveiled last week the efficacy topline data of another program, called Donesta, in post-menopausal hot flushes, considered as an even more interesting opportunity than Estelle. One of the 2 trials (the North American one) technically failed on 1 of the 4 co-primary endpoints, so one has to see how the US FDA will view things. The safety topline data will be known within the next 18 months, with potential subsequent filings and approvals. The US commercialization could occur around the end of 2024 in the US, and 2025 in Europe. Meanwhile, Mithra will try to monetize the Donesta program by signing license and supply agreements for the US and Europe. 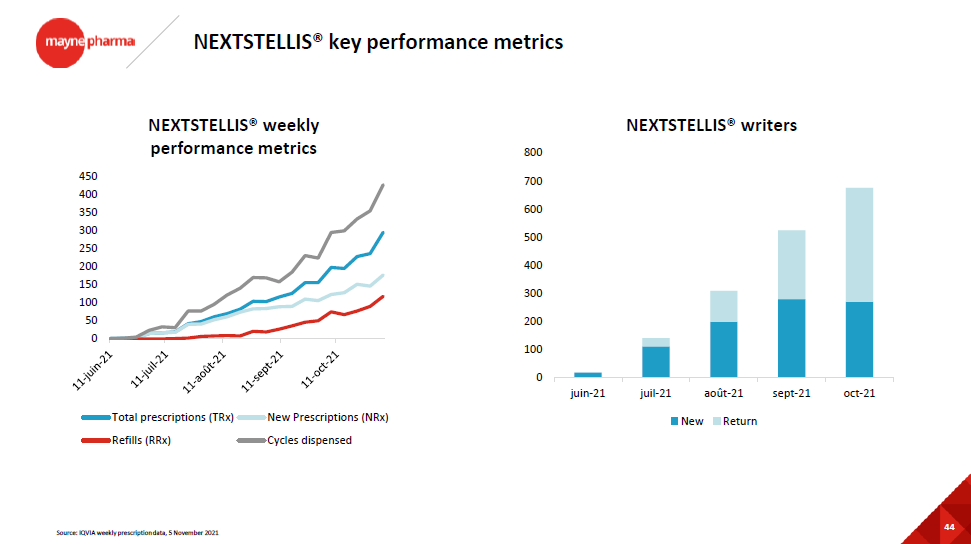 Although Idorsia technically received their first approval with JNJ’s PONVORY, the Swiss biotech run by the Clozel’s (who ran Actelion until the acquisition by JNJ), the company received the OK from the FDA for daridorexant (dual orexin receptor antagonist with short half-life), brand name QUVIVIQ in insomnia. The plan is to market the drug with the commercial infrastructure of Syneos Health, Idorsia reserving the rights to build its own commercial infrastructure for other core areas. The CEO Jean-Paul Clozel acknowledged during his presentation at the JP Morgan Healthcare Conference a certain deception on the US label, which according to him, does not reflect the next day performance advantages of the 50mg dose (linked to the IDSIQ PRO). But he also added that the positive phase 3 data could be used for promoting QUVIVIQ’s highest dose. Despite the fast the approval lands early in 2022, the FDA recommended for QUVIVIQ to be classified as a controlled substance. Therefore, the actual launch is delayed into this year, following scheduling by the US Drug Enforcement Agency. Catalyst-wise, after 2 mid-late stage setbacks with lucerastat (Fabry’s) & cenerimod (SLE) in H2’21, Idorsia should also expected the Japanese approval of clazosentan in vasospasm associated with aneurysmal subarachnoid hemorrhage in Q1’22, whereas the results of clazosentan ex-JP phase 3 are expected at the end of the year. The aprocitentan phase 3 (licensed to JNJ) in resistant hypertension should readout in the middle of the year. Finally, POC data are guided in H1’22 for ACT-539313 in binge eating disorder. 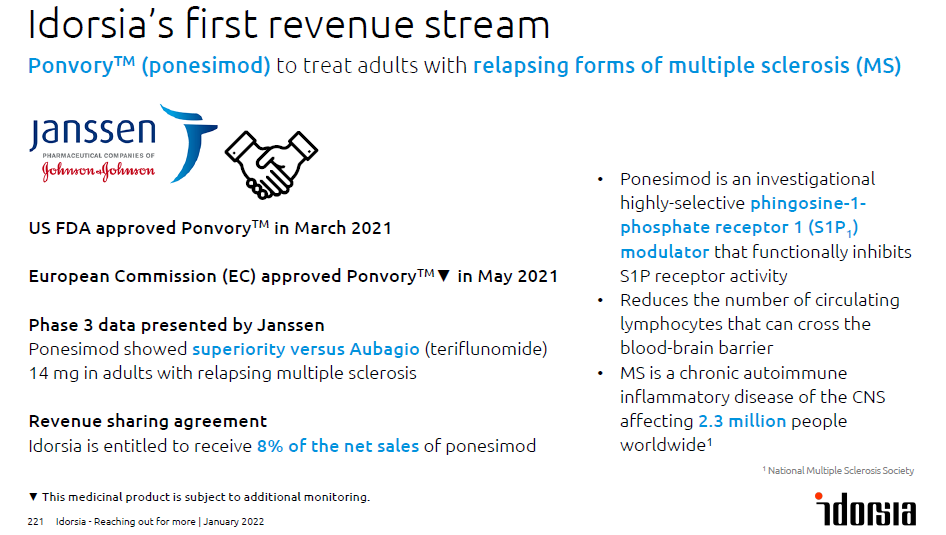 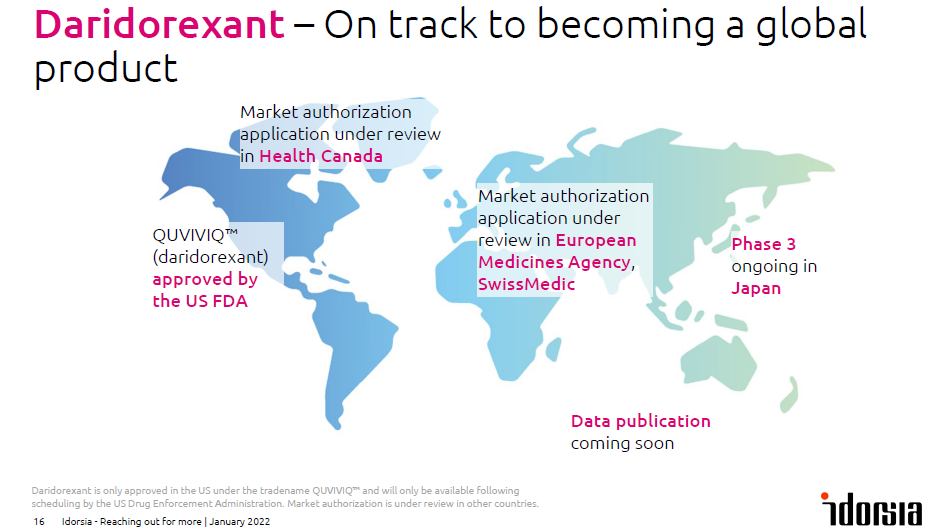 Finally, Valneva expects the equivalent of EUAs in Europe, the UK and the Kingdom of Bahrain, in Q1 for the first 2 territories. While the APA in the UK was cancelled last year, the French-Austrian vaccine manufacturer manages to sign an APA with the EC, for 24.3 million doses in 2022 & potentially 35.7 million doses in 2023 in option), valid upon approval in Europe.
Smaller launches of recent approvals are also expected, like Cassiopea/Cosmo’s Winlevi in acne by Sun Pharmaceutical in the US and Europe, or Paion’s Byfavo by themselves or by partners, in procedural sedation or general anesthesia. 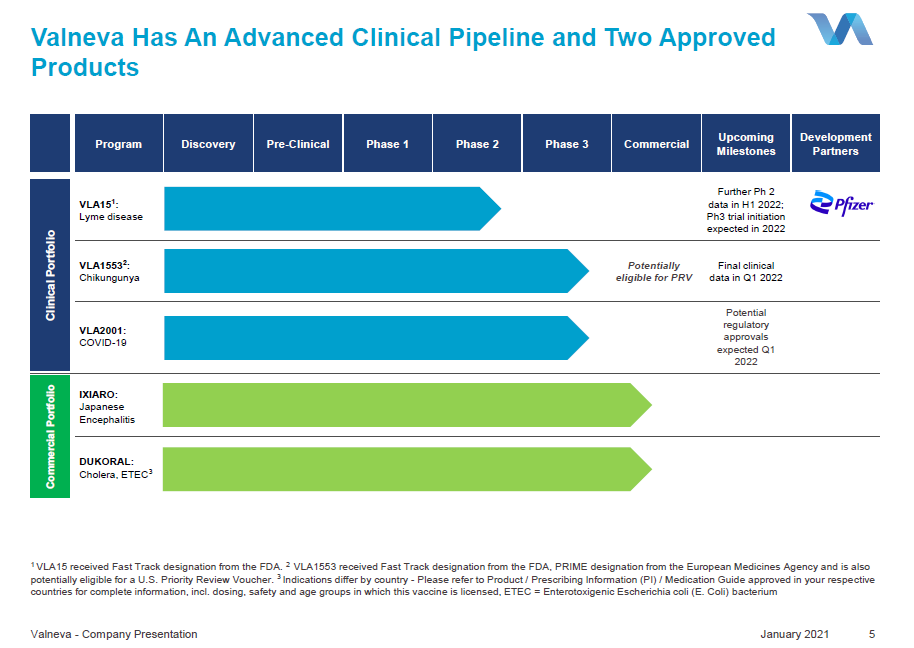 After 2 years of mid-to-late stage pipeline depletion, all the remaining hopes to restore some trust were placed in the Toledo program, a new class of inhibitors of the SIK family, viewed as a breakthrough in immunology at Galapagos. Whereas it is too soon to say whether or not the SIK family will play an important role or not for autoimmune diseases, the first Toledo programs, a pan-SIK inhibitor in 2020 and a SIK2/3 inhibitor in 2021 didn’t yield in very convincing results. The first SIK2/3 inhibitor 3970 delivered mixed results, at best. The company blamed potency & selectivity issues, and the company will try to screen new compounds from its library, relying on the few positive signals from the small POC studies. Many observers tried to question whether the company didn’t set a bar to high by trying to find a selective dual-target inhibitor, instead of trying to screen inhibitors of only a single isoform at first. But it does not seem the company would change its strategy, for now.

With all these negative events, the Belgian biotech underwent a reorganization, already started by separating the Chairman and CEO positions. The CEO will also retire this year, and the CSO left the company as well. The new CEO will have a lot of challenges ahead. The Board is looking for an external candidate with a strong R&D experience. While the new CEO will have to appoint a new CSO, the primary mission will be to identify a late-stage asset for in-licensing or an acquisition target. Meanwhile, the agreement with Gilead remains in full force, and the company has a clear objective: meeting the breakeven point for Jyseleca in Europe by 2024. 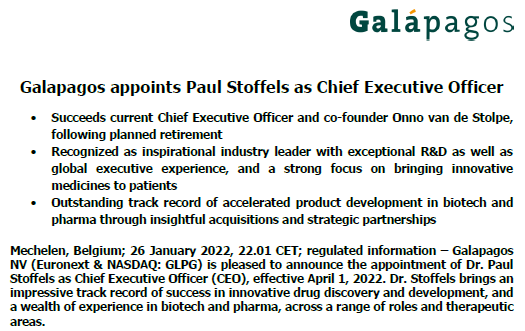 This is probably the fastest U-turn for an accelerated approval ever in the US, since PEPAXTO was approved in late-line R/R MM at the end of February 2021, and that the Swedish biotech voluntary withdrew its NDA at the end of October 2021 (8 months after). Oncopeptides, who had submitted almost at FDA’s request in 2020 based on the HORIZON single-arm open-label study, unfortunately figured out a few months later that the OS data in the OCEAN RCT were numerically detrimental in the PEPAXTO group when compared to the SOC treatment Pomalyst, when used in earlier lines (recently published in the Lancet Heam. LINK). The company tried to play the subgroup card to have OCEAN considered as a confirmatory study for the original label, in this subgroup. But instead, the FDA added other requests and the company gave up, since the commercial opportunity was likely not there anymore. Another case where accelerated approval can be assumedly discussed.

Of course, the stock price was roller coaster, had peaked at 215 SEK after the US accelerated approval, before touching 3.4 SEK after the withdrawal at the later part of 2021. The stock ended with a -95% performance in 2021.

Meanwhile, the review process is still ongoing in Europe, where the subgroup card is usually more possible. Nothing guaranteed though, but in the case the outcome would be positive (in fact, likely a bit before that), the company will start to look for a partner for PEPAXTO commercialization in the Old Continent.

Given that the company is back to the drawing board for the future of its Peptide-Drug Conjugate platform, the former CSO (and CEO) was appointed back as CEO. There was also a drastic reorganization to save costs and extend the runway. More strategic details to be provided this year.

Last minute: it seems we are off for another surprise, as Oncopeptides issued a statement where they rescind their withdrawal in the US! 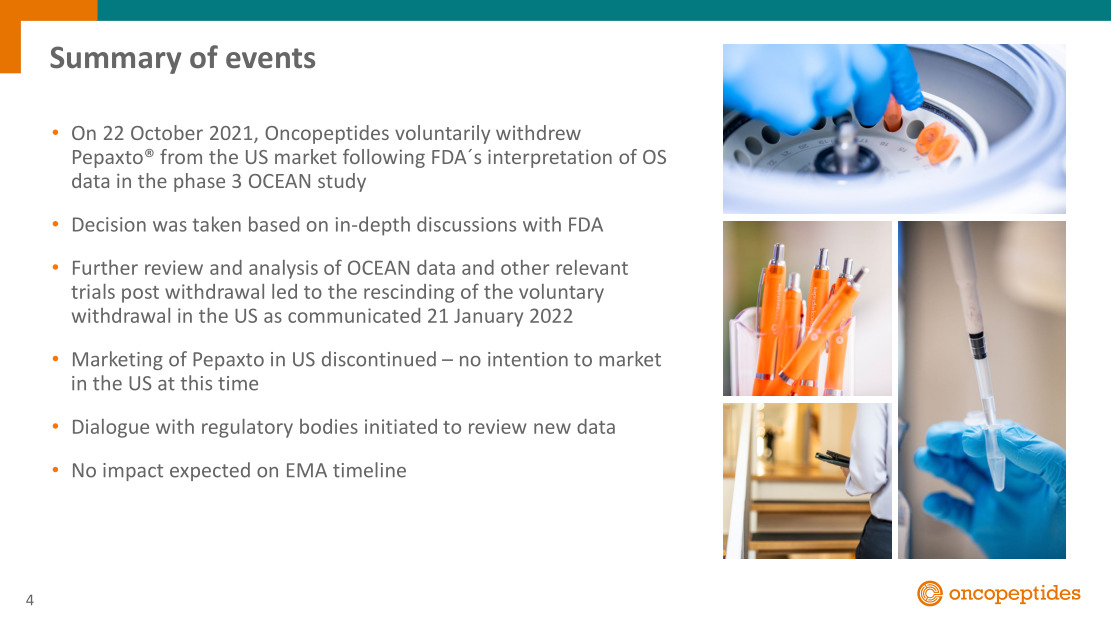