From pandemic to endemic, but when?

The world is now entering its third year into the COVID-19 era. According to the data from Our World In Data, at the end of last year, there were 288 million confirmed cases recorded since the beginning of the pandemic (a number largely underestimated versus the reality) and more than 5.4 million deaths (also underestimated).

The almost miraculous availability of the first vaccines at the end of 2020 in the first Western countries, and the progressive rollout in more countries throughout the world during 2021, obviously changed the course of the pandemic. Moreover, the population is many countries is not naïve anymore, either thanks to vaccination, either because of infections, or the mix of both. The fact that the last dominant variant is highly transmissible (R-naught/R0 estimated between 8 & 15, which makes it the 2nd most transmissible virus after the 15-18 of measles). As some virologists had predicted, the evolution of viruses causing a respiratory disease usually tends to make the virus more transmissible but also tends to make the disease less severe when the virus mutates, which seems to be the case so far. May it remain like that in the future. In short, the theory supporting this thesis is that the mutations acquired to favor the transmissibility are not always compatible with the intrinsic properties linked to the severity. As an example, it has been reported in a preprint that the capacity of Omicron to hijack the interferon pathways was impaired, when compared to prior strains (D. Bojkova et al., preprint of Jan, 4th, 2022).

The other recurring narrative, especially from the leading vaccine manufacturers, is the transition from a pandemic state to an endemic situation, where the virus would remain active locally more than at a global scale like today. Some even claim that "the Omicron is the last wave", that "this is the end of the pandemic", and that the next evolutions "will be like the flu", with seasonal recurrences. Hopefully we are there yet, or maybe we are still in an in-between, where we might see more “Flash pandemics” like the one caused by the Omicron variant. “Flash” since this variant was reported at the end of November 2021 by South African scientists, and that it is anticipated that the Europe and the US may already see their peaks at the end of January, or early February 2022 (with variations from one country to another). So higher peaks, but over shorter periods in most countries. 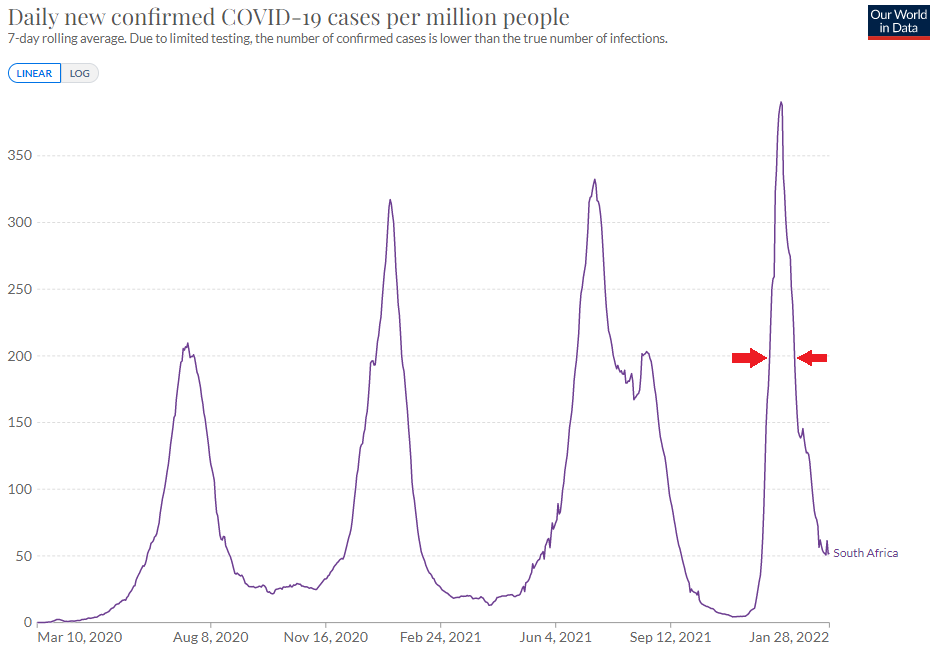 Credits: Our World in Data


Now, will we see new peaks at the end of autumn or every winter, at least in the next few years, with almost normal spring & summer seasons, or is the pandemic really over like Pfizer’s CEO Albert Bourla believes, or can we see new variants reversing the course of evolution "out of the blue"?

Another point concerns the vaccination everywhere in the world, and particularly in the Low- and Middle-Income Countries. Remember the WHO’s message: “No one is safe from COVID-19 until everyone is safe”. We see that there are logistic issues (keeping the doses under cold/ultra-cold conditions, or delivering the doses in some areas) and operational challenges (e.g. finding people to administer the doses) in many of these regions, on top of the same potential hurdles in willingness to adhere to vaccination. Some massive wastes of doses have already been reported [Reuters]. There is also the message that the doses provided to LMICs, coming from gifts from the Wealthiest countries (notably doses of the AstraZeneca vaccine) are not from the most effective vaccines (i.e. the mRNA ones, until now). Also, the needs for frequent boosters might not help to increase the availability of doses to LMICs. The first commitment of BioNTech and Moderna to build manufacturing capabilities in Africa were made, likely partially in answer to the pressure made by African countries to waive vaccine patents, along with India.

In 2021, the armamentarium to fight COVID also marked some progress, notably with advances in oral antivirals (nirmatrelvir/ritonavir, and the more controversed monulpiravir), supplementing the monoclonal antibodies in the ambulatory setting. In the hospitalized setting, remdesivir, dexamethasone, anakinra are used but there is still unmet need, and no significant progress was made in 2021. Same status in the ICU setting.

Finally, what’s next with vaccines, are there still an opportunity? A lyophilized formulation was investigated by Pfizer/BioNTech (and maybe by Moderna) but there were no results disclosed to far. Other investigational vaccines include oral & nasal formulations, but what would be their interested? What about the need, or not, for variant-specific vaccines?

Valneva conducted a phase 3 (Cov-Compare) of their inactivated virus vaccine candidate head-to-head to Astrazeneca’s Vaxzevria in adults (primary vaccination with 2 doses 28d apart). The study showed the superiority of VLA2001 against Vaxzevria in terms of nAb titers 2 weeks after the last shot, the non-inferiority in terms of seroconversion, and significantly lower solicited & systemic AEs in a 7d timeframe. Given the study was performed in the UK, there were challenges to enroll elderlies (>=55y), so meaningful data in this population still has to be generated, which is currently addressed by specific studies, also in younger ages. A booster study in the UK (Cov-Boost) showed pretty weak boost data for Valneva’s candidate, but the French company defended their candidate, saying they would launch their own study. Anyways, they started the rolling submission in the UK (the UK government has cancelled the APA during the year without providing convincing reasons, thus cutting the funding for the development), in Europe (the regulatory part will be of interest for potential other vaccine manufacturers not yet approved – APA signed in 2021), and in Bahrein (small APA signed also in 2021). The potential approvals/authorizations are expected in Q1 this year, as recently confirmed.

Bavarian Nordic, another vaccine player, generated interesting data in phase 1 for their VLP-based vaccine candidate in a primary vaccination setting (2 shots), with high immunogenicity (potentially higher than with mRNA vaccines) and a safety profile consistent with licensed protein-based vaccines. The first phase 2 data in booster setting in vaccinated subjects yielded positive data in December 2021, in adults and elderlies. Other cohorts are ongoing. The Danish company believes they could launch a registrational study against a licensed vaccine (preferentially an mRNA one according to the last conference call), based on the immunogenicity. However, there is still the issue of the financing, and the company has clearly set the priority for their RSV program. Thus, it is not clear how strongly committed the company is with respect to its guidance of the potential approval/authorization around the end of 2022.

Other players entered in clinical phase. OSE Immuno’s T-cell biased vaccine candidate induced tolerability issues seemingly linked to the MoA. The company already understood that it would be difficult to be develop their candidate for the general population, and already guided to corner the positioning in immunocompromised subjects, would they continue the development. Scancell started their clinical trials of their own T-cell biased vaccine candidate in South Africa. Same for Vaccibody, now Nykode Therapeutics, (2 candidates, one “traditional” and one T-cell biased). Both are expected to deliver data in 2022.

The main candidates in registrational studies are:

See more readouts in the Outlook for 2022 section.