These include the extra sources of cash, outside those from financing activities (see Figure 35). Indeed, there are 3 main sources of additional financing we will consider in this section:
1. Cash considerations from upfront or milestone payment from collaborations or agreements with partners
2. Revenues from legal activities (mainly awards from Court decisions from various litigations)
3. Divestments of assets (e.g. real estate, stakes in other companies)
The Figure 38 recapitulates the amounts originating from all these categories in 2018. The grand total at the European level, adding both the financing activities and the extra sources of cash, reaches 4.6 bEUR in 2018 (3.62 bEUR from financing activities, and 0.97 bEUR from extra sources).
Overall, more than 970 mEUR were collected from these additional sources during the 2018 reporting periods. In fact, these funds originate almost exclusively from partners, as there were only few awards from legal activities and only few divestments as well, over the period. For these reasons, we can estimate that around 90% of these 971 mEUR came from partners. Of note, only 39 companies (26%), mostly with a late-stage profile, reported non-null extra cash amounts, as one could expect. These amounts reflect how the companies manage to create value with their assets at a point in time. 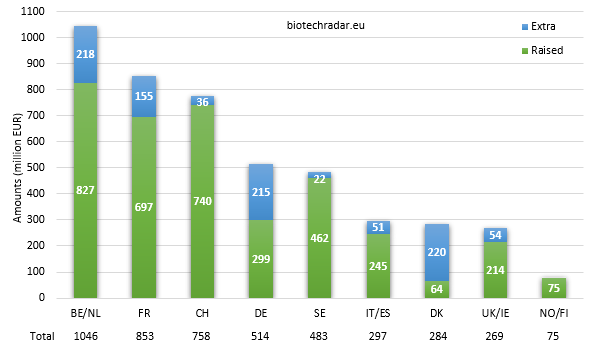 There were 4 countries/clusters leading by a margin. Denmark’s short lead over Belgium/ Netherlands and Germany can be attributed to Zealand Pharma (sale of Soliqua/Suliqua and Lyxumia/Adlyxin for 205 mUSD). Galagagos (126 mEUR) and Mithra (69 mEUR) drove the numbers up for Belgium/Netherlands, while Evotec (multiple partnerships generating almost 150 mEUR of disclosed upfront and milestone payments) and Morphosys (almost 50 mEUR) contributed the most for Germany. Consistently with previous comments about France, the additional cash came from a more “uniform” distribution, and was not dominated by only 1 company in particular (9 contributing companies including Innate Pharma, Adocia and Poxel for 2 thirds of the 155 mEUR). With much smaller amounts, around 50 mEUR, UK/Ireland and the Southern Europe cluster rank 5th and 6th. Switzerland and Sweden gathered even lower extra amounts, from 20 to 36 mEUR each, while Norway/Finland collected simply no extra (small number of early/mid-stage companies).
Finally, we can see that the extra amounts represented a significant proportion of the total cash (financing and extra) only for 2 countries: Denmark (77%), due to a non-recurring revenue from an exceptional transaction, and Germany (42%), more due to the business model of the 2 R&D powerhouses that are Evotec and Morphosys, and therefore less likely to vary over time.