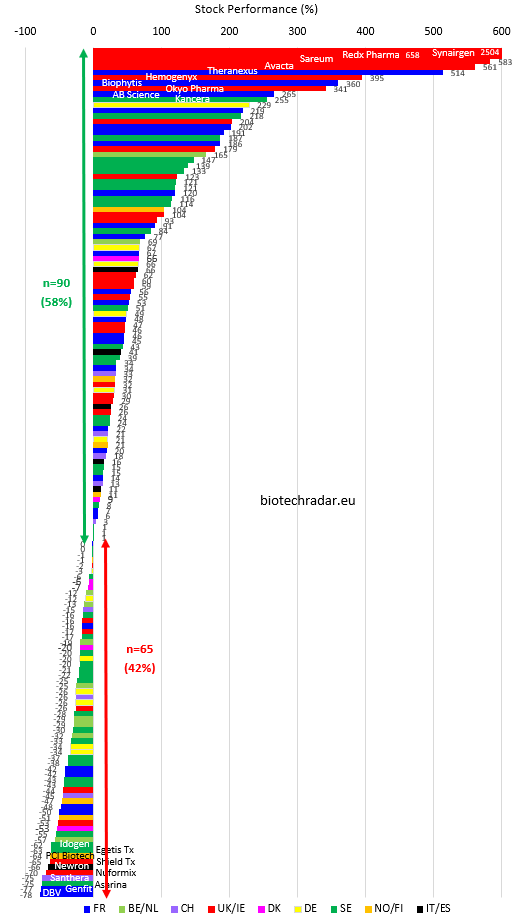 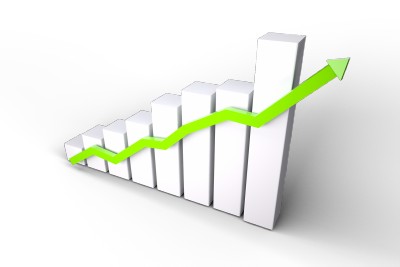 1- Synairgen, UK, +2504%
As last year with Silence Therapeutics, the UK topped it in 2020, this time with Synairgen. The inhaled interferon Beta 1a SNG001 of the small British company was included early in the WHO’s list of potential drugs to investigate in COVID-19, which was what the company did, with a pilot phase 2 study in hospitalized patients that yielded some potentially encouraging results in July, despite a communication that was not really clear at that, later improved in September. These phase 2 results were published in the Lancet (which adopted a very pro-UK research stance during the pandemic) in November. A phase 3 has just been launched in hospital setting. The company had to proceed with last minute protocol changes that delayed the start of the study. Being a small company comes also comes with some shortcoming, even though the world can thank the UK for its outperforming clinical research (in particular with respect to the RECOVERY study). There is another arm to the initial phase 2 (“home setting”) but the timing for results is unclear. The company also disclosed some partial results in COPD that were seemingly positive, but the dataset was incomplete. In any case, the investors seem to see a body of evidence here. Confirmation or not in 2021 for SNG001 in COVID-19?

2- Redx Pharma, UK, +658%
The British company was almost taken over by Redmile (approximately 80% of the stakes) and Sofinnova (roughly 10%) last year, injecting enough cash to fuel the development of the programs of an R&D team that was literally spoiled in the past few years. After an incredible story about the rental of their offices in 2017 that led them temporarily into administration, the company had to sell their selective non-covalent reversible BTK inhibitor to Loxo Oncology for 40 mUSD. Loxo was then acquired by Lilly mainly due to another program but the results published at last ASH showed that RXC005, now LOXO 305, had a tremendous potential. Probably a lot of regrets for Redx, but also a validation of their know how. The company signed another collaboration with Jazz for up to 3 programs including their pan-RAF small molecule. Now, Redx focuses on RXC004 (porcupine inhibitor / WNT pathway) in oncology. So far, the clinical development has not been very smooth, since the company had to face a first clinical hold, then lifted, but had to deal with the pandemic, like any other company, in 2020. Redx also plans to enter in clinics with their ROCK2 inhibitor to target fibrosis. Finally, they also disclosed a SHP2 inhibitor program, which is an oncology target with an increasing interest lately. With a small float and reference investors able to provide a strong financial backing, and despite the company still being an early-stage company, the investors reviewed their valuation estimates upwards in 2020. Now all eyes on RXC004 first data in 2021.

3- Sareum, UK, +583%
Another British company to complete the podium of 2020. In 2020, the focus moved away from their Chk1 Inhibitor SRA737 (licensed to Sierra Oncology but paused) to their JAK1/TYK2 inhibitors in oncology and probably more for inflammation (preclinical stage). Sareum also disclosed having plans to launch a COVID-19 trial in 2021 for their JAK1/TYK2 SDC-1801. Given the small market cap, the AIM investors saw an opportunity here. However, the competition will be tough, with Bristol-Myers Squibb TYK2 inhibitor (BMS-986165) having shown interesting POC data in psoriasis. Pfizer (PF-06700841; TYK2/JAK1 inhibitor) is also in. Galapagos as well (GLPG3667; TYK2 inhibitor – but also has 3121 as a JAK1/TYK2), and probably more. So, one may expect this field to be crowded in the years to come. Finally, the question of the selectivity of such dual inhibitors versus 2 separately selective compounds may also be asked. The silver lining being that this could be interesting for Sareum, in terms of read across and for potential partnering opportunities. Now, will Sareum be able to generate POC data before partnering? Unless they announced a partnering with an upfront payment in cash, the company will need to raise new funds in the coming months.

4- Avacta, UK, +561%
Another British company, and also another COVID play. The company inked partnership to develop COVID-19 (anti-SARS-Cov-2) affimers (antibody mimetic molecules) as reagents for diagnostics. Still no COVID-19 rapid test launched though (with Cytiva or Adeptrix), as of today, to our knowledge. Before COVID, the lead programs were in oncology. The first ones should enter in clinics in 2021.

5- Theranexus, France, +514%
First non-UK company in the ranking, the French biotech claimed positive POC data in excessive daytime sleepiness associated with Parkinson's Disease for THN102, a combo drug of modafinil and flecainide. This came after negative with the same compound in excessive daytime sleepiness, but due to narcolepsy. The company then said they would partner the program before the end of 2020. An affirmative tone that is surprising, given the uncertainty when it comes to ink deals. Later in 2020, the CEO said “ideally before the end of the year” (note the “ideally”). Now, there might just be a delay, due to COVID or anything else. We will see if the management holds its promise, and with what kind of deal economics. Many observers believe that 2020 could the year of CNS / neurology, notably if aducanumab is approved by the FDA. So, perhaps it will also profit to Theranexus. The company plans to launch a pivotal trial (adaptive design) in Batten Disease in H2 2021, with an in-licensed molecule from BBDF (likely originating from Evotec discovery platform). With the emergence of gene therapy for this disease (preclinical), the company could see some challenges in the future.

Other positive performances:
• AB Science (+265%, France) touted positive data in progressive forms of MS, asthma uncontrolled by CS, mild/moderate Alzheimer, also launched confirmatory studies in ALS and indolent systemic mastocytosis.
• Heidelberg Pharma (+229%, Germany) is still late with the entry of their first anti-BCMA ADC with their proprietary amanitin payload. Though, 2020 has been very prolific for ADCs (takeovers by Gilead over Immunomedics, Merck over VelosBio, BI over NBE-Therapeutics), without forgetting the deals between AstraZeneca and Daiichi Sankyo for Enhertu in 2019, followed by a larger ADC alliance last year. Moreover, the investors noted that German billionaire’s dievini Hopp BioTech was also the main shareholder of the company (approximately 75% of the shares). With Curevac booming on Nasdaq in 2020, and dievini Hopp BioTech being also an important shareholder in Curevac, the investors also granted a premium to Heidelberg Pharma, hoping that “everything dievini touches becomes gold” would come true once again.
• Inventiva (+219%, France) obtained positive data in NASH with their pan-PPAR agonist lanifibranor. Which might have come as a surprise after Genfit’s failure. Inventiva took the opportunity to proceed to its US IPO. Some skepticism though, notably on the observed weight gain, and the occurrence of edema during the phase 2b. However, this is currently the only compound that showed a benefit both on NASH resolution and on fibrosis. Following the interactions with the regulatory authorities, Inventiva is currently preparing the launch of their phase 3 around the middle of the year. AbbVie should also disclose the outcome of their POC trial with their ROR-gammaT, originating from Inventiva. Last week, at the JP Morgan Conference, F. Cren, the CEO, indicated that partnering discussions were ongoing for odiparcil, for which Inventiva de-committed.
• Cantargia (+218%, Sweden) disclosed promising anti-tumor activity in PDAC and NSCLC, for nidanilimab (anti-IL1RAP) in combination with chemotherapy (corrected). Data on relatively small numbers though. While interesting on the paper, the study is an early dose-escalation/POC studies, so not an RCT. In addition, in combination with another active drug. The company is already working on the next steps. The investors wanted to believe the signals were real. Also coming in 2021, a read across from Novartis studies of canakinumab in NSCLC.
• Indivior (+179%, UK) managed to preserve significant sales of Suboxone Film in the US during the pandemic, during which the opioid overdose issues increased. First signals of life of Sublocade are potentially emerging as well. More importantly, the company managed to find an agreement with US DOJ/Western District of Virginia, who had filed against Indivior in 2019 for alleged fraud claims including 28 felony counts, and seeking a fine of up to 3 bUSD (!), which would have led to company to bankruptcy. Indivior will still have to pay 600 mUSD by the end of 2027, but at least the company is still alive. Its CEO also stepped down, as he was involved in a related case. Months earlier, the former parent company of Indivior, Reckitt Benckiser had also found an agreement with the US DOJ (like almost all the companies that made a lot of money in the OUD business in the past decades). But you don’t need to be a long-time follower of the company to understand that following it is like following Dallas or The Young and the Restless in the 80s/90s: the drama never stops. When one ends, another shows up. In last November, Reckitt Benckiser filed against Indivior, claiming 1.073 bGBP to its spun off company. Now, it’s a family case.

Pages: 1 2 3 4 5 6 7 8 9
error:
Manage Cookie Consent
To provide the best experiences, we use technologies like cookies to store and/or access device information. Consenting to these technologies will allow us to process data such as browsing behaviour or unique IDs on this site. Not consenting or withdrawing consent, may adversely affect certain features and functions.
Manage options Manage services Manage vendors Read more about these purposes
View preferences
{title} {title} {title}