The stock performance of the 155 European public biotech (biopharma) companies in our universe reached an amazing +63% on average in 2020 (companies listed as of 31/12/2019, plus those newly listed on the main European marketplaces during the year). Even the median performance was strongly positive, with +14.3% (mean +12.9% / median -8.1% in 2019, and mean -17% / median -29% in 2018), reflecting a general bullish sentiment. Therefore, and conversely to a normal year, the selectivity based on fundamentals or other considerations (outside COVID-19 considerations) was probably not the strategy yielding the best performance in 2020. Or if there was a selectivity to operate, it was on the stocks of the companies with a program investigating one of their programs against COVID-19. However, guessing which company would pursue COVID-19 as an indication was probably more a Russian roulette game more than anything else. 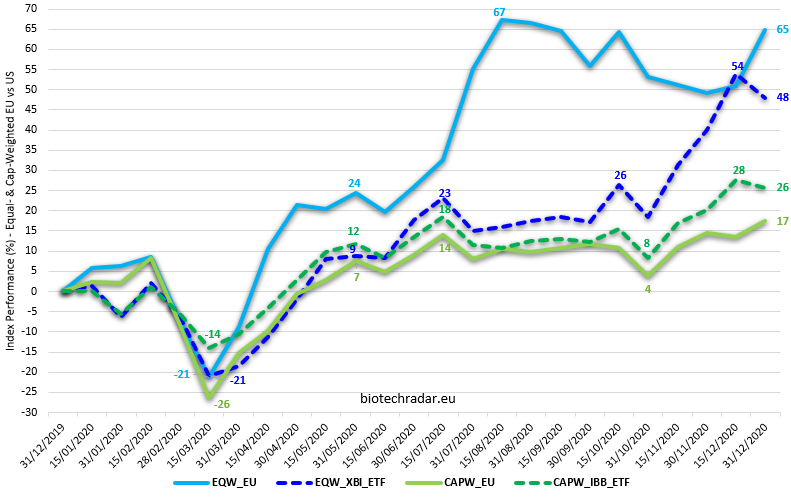 
At least, 2020 is not too hard to comment for the healthcare sector. 2020 started, then the COVID-19 pandemic spread worldwide. The main indices in Europe and in the US went down between 30 & 40% in the middle of March, then it was all about a V-shape or a W-shape recovery, or even an L-shape. It ended with a V-shape.

In Europe, a 750 bEUR COVID-19 Recovery Fund was set, with another stimulus package superior to 1 trillion EUR for the 2021-2027 period (long term budget), will bring the total financial firepower of the EU budget to 1.8 trillion EUR. In the US, the federal government allocated more than 3 trillion USD to support the economy. Of course, this environment impacted the stock markets positively, whereas other metrics like unemployment rates (6.7% in the US in December 2020, versus 3.5% before the pandemic and with a peak at 14.8% in April, 16.4% in Spain, 8.8% in France and 8.9% Italy -November data for these 3 European countries-, according to the OECD) or GDP growths (-12.8% in Spain, -10.6% in Italy, -9.8% in France & in the UK, -7.2% in Europe, -4.3% in the US, according to the latest IMF projections) were very much less positive.

For the year, the performance of the biotech indices recorder another strong year in a raw. The XBI ETF (equal weighted) ended on fire, with +48% in 2020 (+33% in 2019), versus +26% (+25% in 2019) “only” for the IBB (market cap weighted), reflecting once again an outperformance of the smaller caps versus the larger ones. As we noted for the 2020 best stock performances of the biotech companies in Europe, the combination “small cap plus COVID” did wonders in 2020 on the markets. This phenomenon, along with some non-COVID news, made our Equal-Weighted index (n=150 companies) to peak in the middle of August, especially driven by incredible performances from UK nanocaps, before taking a short breath. Over the mid-March/mid-August, the European biotech sector clearly outperformed it US peer. The Equal-Weighted index finally recorded a huge +65% performance at the end of the year (+13% in 2019), whereas our Cap-Weighted index had a more modest +17% in 2020 (after +30% in 2019). This large difference is mainly explained by the fall of Galapagos stock by 57%, and in a lesser extent to the -26% of Morphosys and the -15% of Idorsia in 2020. Also, the involvement of the largest European biotech companies against COVID has been thin: among the 5 largest companies by market cap at the end of 2019 (Genmab, Galapagos, argenx, Morphosys, Idorsia), argenx only had an IST using a preclinical candidate, and Morphosys is involved through GSK’s otilimab (partnered program), with a phase 2 running.

For the smaller pharma companies, ROVI, involved in Moderna vaccine manufacturing in Europe, gained 55%, while Alk Abello signed a second outstanding performance in a row (+53% in 2020 after +70% in 2019), the Danish allergy specialist signing a strong performance on the EBITDA. Veloxis (DK) was de-listed in February 2020, following its acquisition by Asahi Kasei (JP) at the end of 2019 for 1.4 bEUR.

After a gloomy 2018, and the beginning of a recovery during 2019, especially in the second half of 2019, 2020 marked a U-turn in the sentiment over the European listed biotech sector. For the first time since 2016, the performance of the smallest (mostly nanocaps) European biotech companies outperformed, with a higher “COVID” effect on this market cap segment. Also, after the panic of March, the markets adopted a risk on strategy worldwide. In the US, in spite of a similar performance over 2020 for the RUSSEL 2000 and the S&P500, the RUSSEL 2000 outperforms the S&P500 since November, so there is an appetite for a broad range of listed assets, and not only on the largest companies. In Europe, the picture seems relatively balanced as well between the largest and the smallest caps on the overall stock market.

Last year, we were wondering whether our European biotech index had bottomed in 2018, after a somewhat mixed 2019. Given the huge rebound of this year, one may expect a correction at some point, at least a technical one (the dreams of having a working drug for COVID-19 for all the companies involved will not last forever). Then, the question is whether the European biotech sector will build on this giant step in terms of financing, and in terms of exposure to the eyes of the investors, and of the general population. It will also be important to see if this pandemic will be an eye-opener on the potential of the biotech sector, as well as on other major challenges like the rampant anti-microbial resistance. At least, it seems there was some level of awareness at the political level. Now will the money follow? It’s another story. There were interesting initiatives being set up during 2020 (e.g. with EIT Health). So, the sentiment can hardly be higher than the current frenzy over the European biotech sector… unless there is an M&A wave in 2021.

The main indices ended with mixed fortunes. In Europe, the German DAX managed to finish in positive territory (+3.5%) and still close to its 2018 highs, while the French CAC moved back by 7%. The UK FTSE lost 14%. Despite being hit harder than other European countries by COVID, and with the last-minute Brexit deal with the EU, the momentum seems quite positive since November in London. In the US, the main indices ended at new all-time highs across the board, but with a large spread in performance, since the Nasdaq signed a progression of 44% (740% of Tesla, 50-75% of Netflix/Amazon/Apple) versus “only” 17% for the S&P and 8% for the DJ. With its earlier recovery from the pandemic than in the rest of the world, the Chinese index ended with a progression of 14%, while the Nikkei also recorded a strong performance (+16%).

Pages: 1 2 3 4 5 6 7 8 9
error:
Manage Cookie Consent
To provide the best experiences, we use technologies like cookies to store and/or access device information. Consenting to these technologies will allow us to process data such as browsing behaviour or unique IDs on this site. Not consenting or withdrawing consent, may adversely affect certain features and functions.
Manage options Manage services Manage vendors Read more about these purposes
View preferences
{title} {title} {title}