The dates of inception & IPOs/new listings of the companies in our selection are plotted on Figure 3, sorted from oldest to newest (N.B. these are not the same companies on the x-axis for both series, as data were sorted separately). Also, these IPO/new listing dates only concern the companies in our selection.
At the end of 2018, approximately 27% had 10 years old or less, 50% 15 years old or less, and 72% 20 years old or less since their inception. In short, the age of the companies is quite evenly spread. For spun-off companies, we indicate the year of the spin-off and not the inception year of the parent company. Finally, one could argue that 15 years of median age is not that young. However, the ability to be properly financed in Europe is far from being equivalent to the US, so a straightforward argument is to say that on average, the companies advance more slowly simply because they don’t have the financial means to do more and faster. 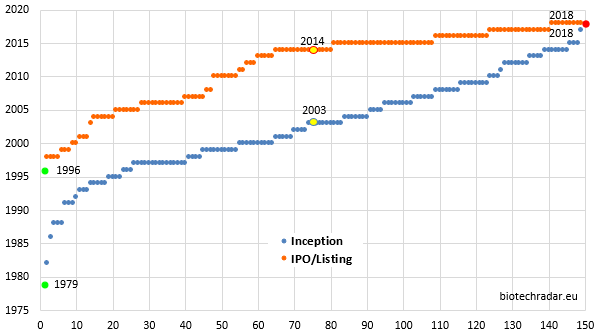 Moving to IPOs, as shown on Figure 4, there was a first peak in 2006 prior to the subprime financial crisis, followed by a real boom during the period from 2014 to 2017. 57% of the companies in our selection started floating on the markets in the past 5 years. The climax was reached during the frenzy over the spring and summer 2015 (19% or approximately 1 out of 5 companies in our selection listed this year). Right after this, the famous “Hilary tweet” calmed down the sector in September 2015. However, the pace remained sustained in 2016 and 2017, before a sharp decline in 2018 (diverging trend with respect to the US), even more accentuated in 2019 year to date.

Fig. 4. IPOs/new listings along time, broken down per stock market operator (our universe)

Concerning the dynamics by stock market operator, there was a deluge of IPOs on Euronext between 2014 and 2016, with 7/11 companies floating in Brussels and Amsterdam over this period, 15/44 in Paris over 2014 and 2015. In Stockholm, the pace was also sustained from 2014 to 2018, with 31/41 of the listings over this period. For LSE/AIM, it is a bit more balanced between the mid-2000s and the 2014-2017 period.
Yet, what was seen as a good dynamic in 2014/2015 may now be seen as a concern, or even more, as a mistake. Indeed, more companies on the markets also means more cash needs in the future. Moreover, these cash needs are not linear along the development of the companies, but they grow massively after the proof-of-concept step, reaching a climax on pivotal programs. Therefore, such a large number of IPOs over such a short period of time (4-5 years) basically translated into an imbalance between ask (the public biotech companies) and bid (the investors on the European markets). This is where the problem is today in Europe: the funds available did not grow as much and as fast as the needs. This aspect was, and still is seemingly ignored or not understood by the stock market operators, or at least some of them, who keep inviting new companies to list on their markets (…or how to kill your own business)! In addition, this imbalance was exacerbated by a sentiment reversal in 2015. Of course, many companies try to cope with these needs by trying to partner their assets past proof-of-concept, but this is never a given, and as of today, many companies with so called phase 3-ready assets in their pipeline are in a dead-end case, as they cannot run phase 3 trials by themselves, without a partner to support all or most of the development costs. At the end of the day, the European markets self-regulated markedly: only 5 IPOs took place on Euronext in the past 32 months (0 in 2019 to date & 2 last-minute cancellations in 2018), and there was only 1 IPO on Nasdaq OMX this year (plus 1 listing transfer from Spotlight), far from the 7-8 per year from 2015 to 2017 and even the 5 in 2018. The message seems clear: only the very appealing company profiles will likely succeed on the road to the public markets, or only those with a large institutional/historical investors’ backing during the operation (but is it the goal for historical investors?). Otherwise, the message seems pretty clear… Enough (listed companies) is enough (financial burden to bear for the investors).

Pages: 1 2 3 4 5 6 7
error:
Manage Cookie Consent
To provide the best experiences, we use technologies like cookies to store and/or access device information. Consenting to these technologies will allow us to process data such as browsing behaviour or unique IDs on this site. Not consenting or withdrawing consent, may adversely affect certain features and functions.
Manage options Manage services Manage vendors Read more about these purposes
View preferences
{title} {title} {title}