A 2020 clinical newsflow density expected to be similar to 2019

The figure below represents the number of clinical trials that yielded topline results (primary endpoints) in 2019 and those with results expected to be disclosed in 2020, with varying degrees of commitment in the timeline obviously. Even if the 2020 numbers already include the 2019 events that shifted into the new year, a derating also has to be applied to the 2020 figures, with typically 30 to 40% of the events of the last quarter (usually a busy one) shifting into the next year. On the other hand, some events might occur in advance (e.g. those who are event-driven), and some short studies (typically small phase 1 trials) could also come on top of these numbers, partially offsetting the delayed readouts. Overall, the 2020 newsflow density should be relatively similar to 2019, or only incrementally higher. This is also true when looking at the development stages: early stage, mid stage and late stage (granularity by phase available on our service for subscribers). 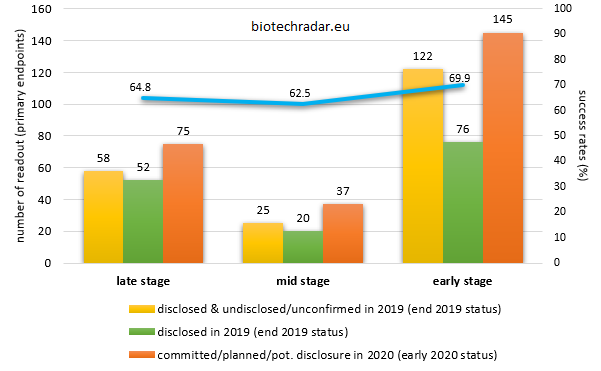 Early stage readouts include phase 1 to phase 2a trials, mid stage readouts include phase 2 trials (in a classical phase 1/2/3 development scheme), while late stage trials include phase 2b trials, phase 2/3 and phase 3 trials. Nonetheless, some phase 2 trials may be registrational, e.g. in oncology or for rare diseases.
On average, the 2019 success rates were relatively similar across the stages, with around 2 thirds of the trials assessed as positive, according to the definition of their primary endpoint(s). This might seem a bit surprising but we have to lay the emphasis on the fact that this is largely due to the mixing of the phases. Indeed, there is much more spread when looking at each phase, separately.
Also, one has to keep in mind that many proof-of-concept trials (mostly phase 2a trials) often list safety as their primary objective, with signs of efficacy only as secondary endpoints. Therefore, the way investors define "success" in this case might be very different from the press release headlines (this statement is true at any phase, but the point here is that this is more a "built-in" factor at this phase).
Finally, the communication of the results of some trials might be only owned by the licensees, e.g. for partnered programs. Thus, the results of several trials might not be material information to be disclosed publicly for these partners, leading to a lack of data disclosure. This is even more true for small phase 1 studies that are part of broader programs (drug-drug interaction studies, ethnobridging studies, cardiac safety studies, etc.). These reasons explain the high number of missing disclosures at the early stage.


2020, a potential record year for approvals of drugs from the European biotech companies

Focusing only on approved drugs in the 3 main markets (US, Europe, Japan), the approvals or rejections of 14 drugs under review were disclosed in 2019, among the 150+ European listed biotech companies in our universe (see our Introductory Report). Of these filings for approval, 8 underwent the FDA regulatory process for approval in the US, 2 submissions were reviewed by the PMDA/MHLW in Japan, and 4 dossiers were studied by the EMA, advising the European Commission.
Out of these 14 applications, 11 were successful (79%). Motif Bio's iclaprim was rejected by the FDA based on liver toxicity concerns after treatment interruption, causing the stock fall and the current sale of the assets and/or company. Acacia Pharma and its API supplier did not resolve the deficiencies pointed out by the FDA and received a second CRL. The most important U-turn, regulatory-wise, was from Kiadis, who withdrew its European MAA for ATIR-101 at the end of the year, even discontinuing the development of the candidate after a negative interim analysis of their candidate's phase 3 trial. The company will now focus on the development of NK cell therapies.
Out of the 11 approvals for the main markets, 6 came from Genmab's DARZALEX. Outside Genmab, only Bavarian Nordic (JYNNEOS in the US), Morphosys (TREMFYA Self-Injector in the US), Oasmia (APEALEA label modification in Europe), Newron (XADAGO in Japan), Shield Therapeutics (ACCRUFER in the US) managed to have their dossiers approved, the latter being the only "first-timer" in the list (company with their first drug approved in either the US, Europe or Japan). Expanding the universe to the companies who were formerly under coverage before being acquired, Ablynx/Sanofi got CABLIVI approved in the US. There were 5 "first-timer" reviews if we add Ablynx (now Sanofi) to Motif Bio, Acacia Pharma, Shield Therapeutics, Kiadis Pharma. Only Ablynx (CABLIVI in the US) and Shield Therapeutics (ACCRUFER in the US) were approved, leading to a 40% approval rate only for "first-timers" in 2019. Finally, not regulated as a drug but as a medical device, Nanobiotix also received a first CE marking for the use of HENSIFY (Hafnium Oxide nanoparticles) in Soft Tissue Sarcoma.
So, what to expect for 2020? A major boost in the number of completed regulatory reviews, and hopefully, in the number of approvals. This should be the main breakthrough for the European listed bios in 2020, with a sharp rise in the number of "first-timers", as defined before. The schedule of the reviews is already known to a large extent, including for the several dossiers to be submitted early in 2020. Not less than 29 decisions are expected in 2020, and another 8-11 filings forecasted in H1, with a potential outcome at the end of 2020, or early in 2021. This represents a 2 to 3-fold increase from 2019 in the number of regulatory reviews. On top of that, 12 of the 29 decisions (41%) will be "first-timers", more than doubling the 2019 figures. And another 4 "first-timers" could be added to the stack, from the additional 8-11 submissions. Even assuming a low 50% approval rate in 2020, the number of approved drugs would still be in progression from 2019. So a new momentum is about to start for European bios, building on a new set of commercial stage companies, arising from the investments over the past 4-5 years on the sector.
As a reminder, early in 2018, 2 "first-timer" companies were acquired, with 2 approvals obtained at the end of 2017: Ablynx by Sanofi after CABLIVI European's OK, and TiGenix by Takeda after the approval of ALOFISEL, also in Europe. So, these 2020 figures might suggest that a new wave of transactions (deals or M&As) could arise from all these decisions, pending positive ones of course, if the market sizes are attractive enough for buyers, and if the business development strategy of the companies is to ink such deals or M&A operations.

Here is a list of more than 50 readouts to look at in 2020. These are topline results (primary endpoints). The list and the comments below are obviously not a comprehensive review of what is going to happen in 2020 (data to our best knowledge, at the date of publication of this post).

* Timings might differ materially from those planned as of today.

NASH will be a center of interest this year, with key or important results for Genfit (phase 3), Inventiva (phase 2b), or Poxel (phase 2a).
There will be many readouts in rare/orphan diseases, for Newron (phase 3), Orphazyme (phase 2), argenx (phase 3 and phase 2), Calliditas (phase 3), Santhera via Idorsia (phase 2b), but also Amryt (phase 3), Pharming (phase 3 of the recently acquired leniolisib), Advicenne (phase 2/3) or Mereo (phase 2b in A1AD/AATD).
For Cell & Gene Therapies, Gensight will have the phase 3 results of their US registrational trial in LHON. Sensorion will likely have NHP data of their gene therapies for rare deficiencies of a genetic origin and causing hearing losses. Nothing clinical expected at Combigene. Cellectis (together with their partners) should only have preliminary data (phase 1b) in 2020. Celyad will try to see which candidate they could select to advance further, if new phase 1b data are supportive, or better, unequivocal. Kiadis (now focused on NK cell therapies) will launch new trials. Reneuron will try to build up on their encouraging hRPC data from 2019 in Retinitis Pigmentosa (phase 1/2). Herantis will also have the phase 2 results of Lymfactin in lymphedema (secondary to breast cancer surgery), while their phase 1/2 results of CDNF in Parkinson's should be released in Q1.
Idorsia will deliver their first pivotal trial results since their IPO, in insomnia but also in Japan in vasospasm associated with aSAH. Oncopeptides, in addition to a potential approval for melflufen in triple-class refractory RR MM (based on HORIZON data), will also obtain the results of their first phase 3 (OCEAN study), testing the superiority of meflufen to pomalidomide, which was the original objective of the company before the fortunate outcome of their discussions concerning the HORIZON study. Less important since the company was recently allowed to file in SCLC, PharmaMar might release the phase 3 results of their ATLANTIS study. The phase 3 interim results of eryaspase in pancreatic cancer will be a hot binary event for Erytech. Genmab will keep pushing for their CD3xCD20 Duobody in B-Cell Lymphoma (phase 1/2), while collecting new phase 3 results in various settings in MM for daratumumab (especially in H2 2020). Ascelia could also have the phase 3 results of Mangoral at the end of the year.
In inflammation, Galapagos will have the first phase 1 results for their 2 initial TOLEDO compounds ('3312 early in 2020 & '3970 later). Many other readouts are expected at Galapagos this year, in OA (phase 2b) for '1972, UC (phase 2/3) and several proof-of-concept trials for filgotinib. Abivax will have proof-of-concept data of ABX464 in RA (phase 2a), while they could also have the phase 2b data of the induction part in UC around the end of the year, still for ABX464.
In CNS diseases/neurology, one will obviously keep an eye on the outcome of Biogen's aducanumab US filing (not submitted), the AD field of European listed bios being composed of Bioarctic (via Eisai... and Biogen), Morphosys (via Roche), Vivoryon, Pharnext, AlzeCure, and Alzinova (preclinical). Sensorion should have their phase 2b results in SSNHL around the middle of the year.
In respiratory diseases, the focus will be on Verona (last phase 2b and phase 3 program launch) and Synairgen (phase 2a) in COPD, along with 4D (phase 2a) and AB Science (phase 3) in asthma.
The readouts of XBrane and XSpray's pivotal bioequivalence studies (XLucane & Hynap-Dasa) are also planned for 2020.
Finally, Valneva plans to have the topline results of their first phase 2b of VLA15 in H2 (Lyme vaccine). 


Disclosure: This post is not a market research. Bertrand Delsuc, publishing director on biotechradar.eu, discloses owning shares in some of the companies in this post, at the time of the publication. This article mainly includes factual data, but some comments might be subjective. These personal views are those from the owner's only, who declares no other conflict of interest, other than the ownership of shares in some biotech companies (no significant ownership in any companies, no short position).

Photo Credits:
Free for use images from, or adapted from pixabay.com and unsplash.