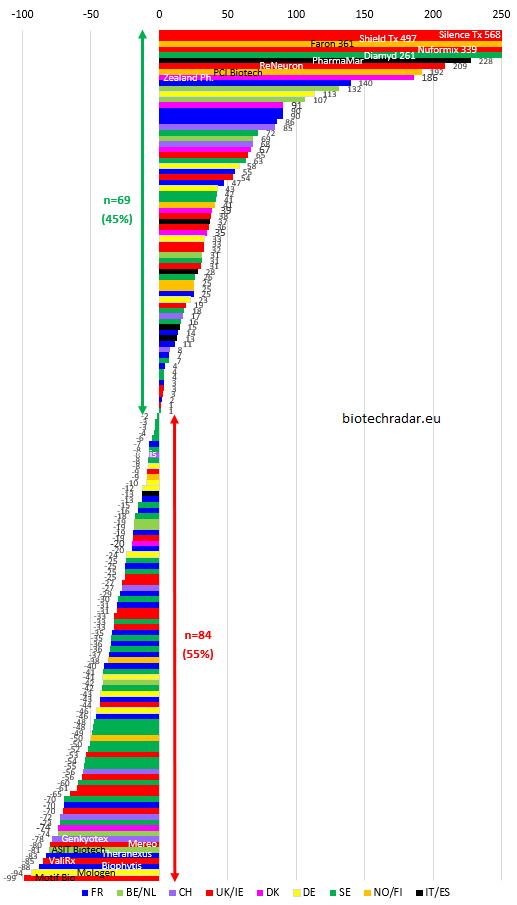 1- Silence Therapeutics, UK, +568%
When one talks about alignment of planets, this was really the case for Silence Therapeutics in 2019. It already started in 2018 with the first RNAi drug approved by the FDA (ONPATTRO from Alnylam, in hATTR amyloidosis), for which tiered royalty on EU sales will be given to Silence, after a litigation settlement in December 2018 (0.33-1.0% through 2023). Modest but better than nothing. The stock had been beaten down in 2018 (-73%), but at the end of 2018, Silence had unveiled a new siRNA program targeting apolipoprotein (a). In July 2019, the company announced a collaboration with Mallinckrodt, for multiple assets relating to the Complement C3 pathway, and up to 1.4 bUSD in biobucks, in addition to the 20 mUSD upfront & 5 mUSD in equity investment. The Medicines Company then announced very good results of LDL-C reduction for inclisiran, an anti-PCSK9 siRNA, so that Novartis decided to put 9.7 bUSD on the table to acquire them at the end of November. GIVLAARI, another RNAi drug from Alnylam, was approved at the same period. These successes were additional validation of the siRNA technology. These events projected the stock performance up to +1064% in early December, but then investors felt an overheat on the stock, still ending the year at +568%. There was also a surprise CEO change in December, after a personal financial issue for David Horn Solomon, who resigned. Meanwhile, the FIH trial of SLN124 in iron overload disorders will be the focus on the short term (Q1 2020), as well as advances for SLN500 with Mallinckrodt. Finally, Silence just announced having signed a technology evaluation agreement with Takeda for an undisclosed novel target. For SLN360 -the apolipoprotein (a) program-, the interim CEO said this week that the company had no intention to partner this program at this stage (same for SLN124). A new CEO should also be appointed.

2- Shield Therapeutics, UK, +497%
Shield is a specialty company, mainly focused on iron deficiency, also knew a brilliant 2019. Early in 2018, the company had announced that their lead asset had surprisingly failed to meet its primary endpoint in a phase 3. The stock cratered and barely recovered, in a tough period for the UK bios, even if a glimpse of hope concerning a reversal of this negative outcome was disclosed a few weeks after the initial disclosure. Indeed, after a closer look at the data, the company identified confounding events that were allowed by the protocol. In April 2018, the company was confident they could file in the US, after the pre-NDA meeting took place, and a new analysis removing these confounding events showed an opposite conclusion. But the stock did not move, ending 2018 at -73%, the market probably not giving much credit to the company at that time. Early in 2019, the company announced many positive events: long-term results of the initially failed trial confirmed the efficacy of FERRACRU (EU)/ACCRUFER (US), new phase 3 results confirmed the non-inferiority of oral FERRACRU/ACCRUFER head-to-head with the IV SOC FERINJECT, and Shield won an IP litigation against TEVA. The stock started a long runup. In July, the NDA was approved by the FDA, with a broad label, as the management hoped (iron deficiency in adults with or without anemia), which sent the stock to around +500%.

3- Faron Pharma, Finland, +361%
The Finnish company, listed on AIM, and since recently, on Nasdaq OMX Helsinki, was yet another 2018 beaten down stock, with -93%. Indeed, the phase 3 of their lead program failed in ARDS, the company blaming an unexpected high use of corticosteroids, proven to be detrimental to Faron's Traumakine. The same outcome was found in a phase 2 in another indication in 2019. The management now wants to find a partner to run new "optimized" phase 3 trials. But the investors focus switched on another asset in 2019: bexmarilimab or CLEVEGEN (anti-Clever-1), targeting a macrophage checkpoint signal in oncology. Among the first patients treated at the lower doses of the dose-escalation phase 1, the company disclosed a partial response, as a single agent. The data were then presented at the ESMO Congress, with biomarkers of activity later on in 2019, but the waterfall plot on n=9 evaluable patients only showed 1 tumor shrinkage (the PR patient). The CEO, always optimistic in his statements, even believes Faron can file for a Breakthrough Therapy Designation, based on these data... The investors followed, speculating, as the CEO guided, on a potential deal for CLEVEGEN. Meanwhile, with the lack of dose-response observed so far, the Scientific Advisory Board recommended to de-escalate to lower doses. Then Faron intends to initiate multiple cohort expansions, starting with CRC, but at which dose? Potential headaches ahead. The comapny also intends to combine this checkpoint with anti-PD-1/PD-L1s, which appears to make sense on the paper... Except that preclinical experiments found potential detrimental effects of this combination in mice, as highlighted during the ESMO poster discussion. A speculative case, but the CEO always seems to have the magical words to keep investors onboard.

4- Nuformix, UK, +339%
Another British company, but that "only" did -32% in 2018. The biosimilar developer inked a licensing deal with Newsummit Biopharma at the end of 2017, for the Chinese rights of NXP001, a cocrystal formulation of Merck's aprepitant/EMEND. Both companies were already working together since 2015. A pilot bioequivalence study succeeded in 2019, sending the stock to the sky.

5- Diamyd Medical, Sweden, +261%
The Swedish company announced 2 news in a row in December. First, they disclosed having potentially identified a biomarker of response to their intralymphatic immunotherapy Diamyd for Type 1 Diabete patients. Second, they announced, slightly in advance to the timeline, positive long-term phase 1b data (30 months) of their T1D treatment (DIAGNODE1 trial). Given the positive momentum of the stocks in December, the Swedish investors bought the news massively. A larger phase 2b is already running in a similar population, with topline results expected in 2020.

Other positive performances:
• PharmaMar (+228%, Spain) inked a big deal with Jazz Pharmaceuticals for lurbinectedin/ZEPSYRE in December (1 bUSD deal value with a 200mUSD upfront payment).
• Reneuron (+209%, UK) provided interesting interim results early in 2019 in Retinitis Pigmentosa, but these were only partially confirmed later on.
• PCI Biotech (+192%, Norway) unveiled having worked with AstraZeneca over the past years, on using their delivery vehicle for AZN's RNA therapeutics, leveraging PCI Biotech's PhotoChemical Internalization technology. A potential deal is expected in H1 2020.
• Zealand Pharma (+186%, Denmark) almost completed the phase 3 program of Dasiglucagon Hypopal in Hypoglycemia, and had positive proof-of-concept glycemic control results in Type 1 Diabete with Beta Bionic's iLet device. Moreover, Zealand Pharma inked a deal with Alexion, to develop a peptide also targeting the Complement C3 pathway (700 mUSD deal value, 25 mUSD upfront payment and 15 mUSD equity investment).
• Poxel (+140%, France) completed the Japanese clinical development of imeglimin successfully in Type 2 Diabete.
• Galapagos (+132%, Belgium) obtained positive phase 3 data for filgotinib in RA, inked a monster deal in a long-term strategic alliance with Gilead (5.5 bEUR in cash upfront payment and equity investment) and unveiled a brand-new class of agents for inflammatory diseases.
• Vivoryon (formerly Probiodrug, +113%, Germany) was quite lucky in 2019, as their Alzheimer's drug had difficulties to find sufficient funds to allow the company to run their phase 2b program in Europe and in the US. But a research found a possible repurposing of the company's lead drug PQ-912 in oncology, relating to the CD47-SIRPalpha pathway. The company gave an exclusive option to Morphosys against a commitment in a further financing operation (for 15 mEUR), leading to a typical recovery scenario. Despite a recent cash injection, allowing to proceed with the European trial, the financing of the US trial is still a pending topic.
• Pharming Group (+107%, Netherlands) had been attacked by a bearish analyst note in 2018 (-33%), underlining competitive concerns for the company in the years to come. But the Dutch company managed to sustain decent positive cash flows over 2019 for RUCONEST, clearing bits by bits these concerns, at least for the short term. The company changed its strategy to a more conservative one concerning the other formulations of RUCONEST once foreseen, and even acquired the global rights of a PI3Kẟ inhibitor from Novartis during the summer, for 20 mUSD.
• Finally, Nuevolution (+91%, Denmark) was acquired by Amgen, after 2 successive opt-in's from the American company in H2 2018.

Of note, the 2019 TOP 4 performances all come from companies from London's AIM markets (5/10 in the TOP 10). 2018 had been awful for UK public bios, leading to a complete capitulation of the markets, and some very low valuations. Unfortunately, AIM is also a market with a very low level of liquidity, even when comparing the turnovers to the total market cap (see our Introductory 2018 Report). Therefore, this market place is prone to see such large variations.