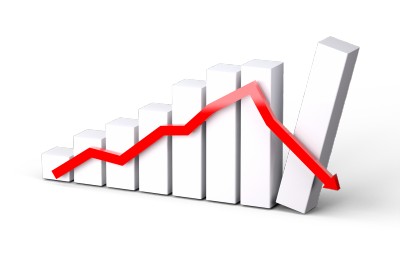 1- FIT Biotech, Finland, bankruptcy
Off competition, FIT Biotech filed for bankruptcy early in 2019. The financial organization they had an agreement with, in the frame of a Bond program, refused to provide the company with more cash, as the company's stock was already in an infernal loop scenario, with a never-ending dilution. It eventually led to breaches of the terms of the financing agreement, precipitating the company into the abyss. Game over.

2- Motif Bio, UK, -98.8%
The British company received a CRL for iclaprim application in Acute Bacterial Skin and Skin Structure Infections. "Additional data are needed to further evaluate the risk for liver toxicity", observed in the days or weeks after drug withdrawal. Too much to bear for the investors. The company is now looking to divest iclaprim or to sell its entire business. Typical one trick pony failure.

3- Mologen, Germany, -94%
Similar case of a lead asset, lefitolimod (a TLR9 agonist), whose phase 3 fails, here in a maintenance setting for 1st-line responding CRC patients, as a monotherapy. The rationale was relying on a weak post-hoc analysis of the phase 2 data. It ended bad, with really sobering data, as disclosed at the ESMO congress. Of course, the company wants to reposition lefitolimod as an IO agent to be used in combination. Not in really good terms with retail investors, with a high cash burn and difficulties to find new funds, the company filed for insolvency at the end of the year. A reorganization process was initiated.

4- Biophytis, France, -85%
The company, specialized in aging diseases and recently in DMD, continued its path on the highway to hell. The credibility of the management has been in cause almost since the IPO during the summer of 2015. Biophytis had disclosed some regulatory setbacks in Europe, just to obtain a mere CTA. Overall, the timeline of the clinical development of their lead program has not shifted in months, but in years. A new delay was announced in 2019 for the results of the ongoing phase 2b of Sarconeos in Sarcopenia. Based on results of an observational study, Biophytis decided to cut the accrual target, hoping to exhibit a higher treatment effect, while preserving enough statistical power to demonstrate a benefit in the gait speed measured during the 400MW test. However, it seems that only very few investors are even considering this outcome as possible. Based on former disclosure of US investors' support just after the IPO in 2015, the company even tried to make an IPO on Nasdaq during 2019, which was eventually withdrawn, unsurprisingly. After all, these US investors hadn't been there for the company over the last years, so why would have they been in 2019? Moreover, Biophytis signed an agreement on very favorable terms on IPs originating from his CEO, whereas the financing only relies on a Bond program (mainly used as Convertibles, even if there is a possibility to redeem the Bonds in cash). Too many negative ingredients for the investors in 2019. A futility analysis should be performed in 2020 (during the first half?) for the sarcopenia phase 2b, with final results currently guided for around the end of 2020, if the futility is not assessed before. Biophytis also intends to launch a trial in DMD, with an adaptive design, but would it still be launched in the case of a failure in sarcopenia? Answer in 2020.

5- ValiRx, UK, -85%
In 2015, ValiRx launched the phase 1/2 of VAL201 (anti-Androgen peptides) in patients with Prostate Cancer, with the objective to reach the MTD. As of the end of 2019, the MTD was still not reached, despite numerous protocol amendments of all kinds. ValiRx mentioned "effects on cancer related to the tumor’s exposure to VAL201 having a complex relationship to the administered dose", to explain this miss. There are indeed other possible interpretations. In addition, the results of an initial trial on 8 NSCLC patients of VAL401, a lipid-based reformulation of risperidone, repurposed here, apparently did not convince the investors. Letters of Intent from one EU & one US partner were announced in March 2019 for the further advancement of VAL401 into the next proposed clinical trial on a co-financing basis, but nothing has been signed since. The financing of the company is also a challenge. Finally, ValiRx acquired the IP of the FIT Biotech's GTU platform after the bankruptcy.

6- Theranexus, France, -83%
The phase 2a of THN102, a combination of modafinil and flecainide, in Excessive Daytime Sleepiness due to Narcolepsy failed early in 2019, with an "overly poor response to modafinil in some trial patients which prevented it from demonstrating THN102's superiority". The stock tumbled, since this was the lead program, the investors also discounting a potential success for the same candidate, this time in Excessive Daytime Sleepiness cause due to Parkinson's Disease, with results expected early in 2020. Cautiously, in anticipation of a new failure, the company acquired the rights of BBDF-101 from the Beyond Batten Disease Foundation. A single pivotal trial is already planned in Juvenile Batten Disease.

7- ASIT biotech, Belgium, -81%
Another one trick pony configuration that ends badly, after a second phase 3 failure. Despite a claimed low p-value, the minimum effect size required by the German PEI for a success in grass pollen allergy was far from being reached. The stock cratered after the disclosure of results. The Board is now looking to sell the assets and IPs, after a refocus in food allergy. The financing is also a challenge.

8- Mereo BioPharma, UK, -80%
After a tough 2018 (-46%), while a merger with Oncomed was proposed by Mereo, the stock continued on the same trend in 2019. Apparently, the merger was not welcome by the investors. In addition, the phase 2b of the company's lead program in Osteogenesis Imperfecta, also known as Brittle Bone Diseases, failed to meet its primary endpoint in November. However, the company believes that the data supports a benefit of setrusumab (anti-sclerostin mAb), not in the trabecular part of the bones (the inner part), as it was measured by the primary endpoint on the wrist, but on the cortical part (the outer part). Some secondary endpoint outcomes also support this hypothesis, according to the company. Mereo now intends to find a partner for a phase 3 to be launched in children with OI.

9- Genkyotex, Switzerland, -78%
Here is another failed proof-of-concept trial of a lead asset, setanaxib/GKT831 (NOX1/4 inhibitor) in PBC, based on GGT reduction after 6 months. The Swiss company believes there is still a future for setanaxib in PBC, and other indications, particularly based on the liver stiffness data of the study, interpreted as a proof of the anti-fibrotic effect of setanaxib, which was by the way the original purpose of the company, beyond demonstrating a benefit in PBC. Genkyotex is now looking for a partner, while the cash runway remains limited.

10- Kiadis Pharma, Netherlands, -74%
The Dutch company was hoping that ATIR-101's conditional approval would be granted by the EMA in 2019. It ended that after an interim analysis of the phase 3 trial aiming at testing the superiority of ATIR-101 as an adjunct to allogeneic haploidentical HSCT, against PT-Cy, the company simply decided to discontinue the trial, and to withdraw its European application. The risks in the powering of the trial were already a concern since 2018, with an accrual target already changed at that time. Moreover, the most recent data of PT-Cy were showing improved outcomes with respect to original assumptions. On top of that, the trial was enrolling relatively slowly. This setback followed another one for the allo-HSCT field, after the failed phase 3 and subsequent marketing authorization withdrawal of Molmed's Zalmoxis (Italy), also during 2019. Kiadis, who had acquired Cytosen in 2019, then announced a refocus on Cytosen's NK cell therapy, wiping out its Theralux platform.

Other negative performances:
• Oncology Venture (-74%, Denmark) changed its CEO and found fresh funds but at a high cost of capital, and with few real advances on the development of their products.
• Promore Pharma (-73%, Sweden) had difficulties to finance the phase 3 program of PXL01 in prevention of post-surgical adhesion after tendon repair surgery, so that they had to propose a monster discount for their last financing operation (something relatively frequent in Sweden).
• The 2 lead programs of ObsEva (-72%, Switzerland) have let investors down. First, the European phase 3 of nolasiban in IVF failed to show an improvement in pregnancy rates, leading the company to discontinue the development of the asset. Then, despite a positive press release announcing the topline results of the European phase 3 of linzagolix (GnRH receptor agonist) in heavy bleedings linked to uterine fibroids, the BMD loss data of the low dose -without addback therapy- were not in line those previously observed. Given that the differentiated positioning of linzagolix relies on having 2 doses approved (the low dose without addback therapy, the high dose with addback therapy), the investors reacted negatively, fearing that an addback therapy would be mandatary also for the low dose, which would annihilate the differentiation to the existing agents in the same class, and this despite very good efficacy results. Given their debt structure, and the failure of nolasiban, ObsEva, who was expecting licensing discussions to speed up after the results of nolasiban, will finally look for a partner for linzagolix, which was not the main option at first, but which became a priority, by force of circumstances.
• In 2018, the pilot PK study of N4's reformulated sildenafil failed to show a favorable profile. Patent applications for all the generic reformulations in the pipeline were discontinued. Then, in the second part of 2018 and in 2019, the company refocused the resources of the Nuvec platform (delivery system, notably of DNA) but things did not go well either. Indeed, inconsistencies were observed between the initial in vitro experiments and the in vivo studies. More technology improvements are needed, with uncertain results. If you add financing concerns for that kind of companies, N4 Pharma's stock (UK) ended 2019 with -70%.
• Neovacs (-70%, France) entered into a reorganization process, as the company seeks regulatory supports for the development of IFNα-Kinoid in SLE. The company was clear in their statements that any partnering opportunity relating to IFNα-Kinoid was contingent to this support (LLDAS criteria as a primary endpoint in a trial aiming at registration). Neovacs also tries to license its preclinical Kinoid targeting IL4-IL13 to save their life.
• Hansa Medical (-70%, Sweden) saw a regulatory setback in the US (one new RCT required for registration) for imlifidase, whereas the management was hoping to file for conditional approval with the existing phase 2 data in desensitization of patients undergoing a kidney transplant. The European MAA is under review, with a decision expected in 2020.
• Indivior (-65%, UK) was the target of a new legal procedure from the DOJ in the US, for alleged fraud claims including 28 felony counts, and with a potential fine sought of up to 3 bUSD, which could lead to the company's bankruptcy.
• Evgen Pharma (-61%, UK) presented interesting phase 2a data for SFX-01/sulforaphane in ER+ Breast Cancer, in combination with aromatase inhibitors, in patients who had become refractory to this class. Unfortunately, the phase 2b of this same agent failed in Subarachnoid Hemorrhage, which was the most advanced program.
• Polyphor (-56%, Switzerland), announced the termination of their lead phase 3 program of the antibiotic murepavadin, after safety events of Acute Kidney Injuries. The program is not completely over yet, as the company studies potential options to salvage the candidate. The company started the phase 3 of balixafortide in HER2- Breast Cancer in 2019.
• Oasmia Pharma. (-55%, Sweden) has not been short of drama of any kind on the recent past, especially concerning their shareholders and their management, and this despite the approval of their first chemo drug, APEALEA. A new management has been appointed in 2019, new funds have been raised. A hard reset, but at the expense of the shareholders.
• Alligator Bioscience (-52.0, Sweden) was dumped by JNJ for the development of mitazalimab/ADC-1013 (CD40 agonist), whose rights have been given back to Alligator, now in search of successors.