As shown previously on Figure 6, 21% of the European public biotech companies have reached the commercial stage, either by themselves, via a partner, or an in-licensing deal. The contributions by country in terms of marketed products are shown on Figure 14 (no duplicate due to approvals in many indications or with several formulations).

Indivior, Allergy Therapeutics and Vectura pull the numbers up for the UK. Overall, the number of companies at the commercial stage at the end of 2018 is quite homogeneous between UK/Ireland, France, Italy/Spain, Germany and Sweden, each with 4 to 6 companies. This is also the case for the number of commercial products, excluding UK/Ireland. The “Southern Europe” cluster and Germany perform well on this metric once again, when compared to the number of companies in these respective countries. There was a total of 76 unique commercial products as of 31/12/2018, including 3 products regulated as medical devices. Additionally, 2 products from 2 acquired companies (caplacizumab/Cablivi from Ablynx now Sanofi, and darvadstrocel/Alofisel from Tigenix/Takeda) were formally approved in 2018 (not taken into account in these figures).
Still on Figure 14, 5 pre-commercial-stage companies were waiting for an approval/certification at the end of 2018: Nanobiotix (France) for NBTXR3 (Hensify - regulated as a medical device, granted CE marking in 2019), Acacia Pharma (UK) for APD421 (BARHEMSYS - second CRL issued by the US FDA), Motif Bio (UK) for iclaprim (CRL issued by the FDA), Paion (Germany) for remimazolam (still under review), and Kiadis (Netherlands) for ATIR-101 (also still under review). Finally, we also add CB-17-01 (Methylene Blue MMX - CRL confirmed by the FDA in November 2018 but still filed in Europe in Q1 2019) from Cosmo to the 5 candidates just mentioned. Overall, 6 unique product candidates -never approved before- were at the registration stage at the end of last year, with a review ongoing somewhere in the world.
The therapeutic areas addressed by the few companies with several products are particularly well weighted in the overall distribution (Figure 15). Neurology (and associated areas) is the leading area among the approved products, with almost one fourth of the share. Another half of the share is composed of infectious diseases, respiratory/pulmonary diseases, immunology and oncology, with 12-14% for each of this areas. Dermatology (along with Wound Healing) and Ophtalmology/Otorhinolaryngology represent approximately 10% of the therapeutic areas. 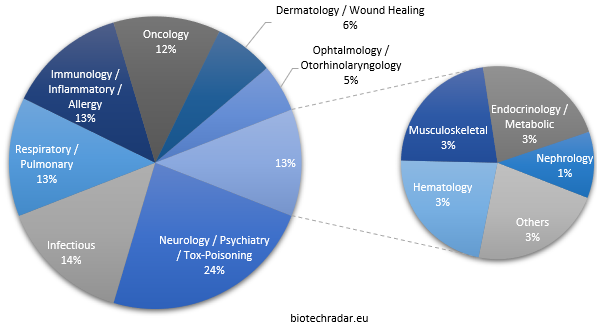 Fig. 15. Therapeutic areas addressed by the 76 commercial products approved from our European biotech universe (1 area only per product), as of 31/12/2018

Only 3 products (4%) could be deemed to address a rare disease. A number likely to grow in the coming years though, as it is identified as an industry megatrend [17].